Prompted by prophesy and supported by his ambitious wife, Macbeth murders the Scottish king and claims the throne. Fueled by guilt and paranoia, the new king and his wife embark on an increasingly bloody campaign to hold onto power. Haunted by the ghosts of those they have sacrificed to ensure their reign, the House of Macbeth cannot escape the consequences of their actions.  This contemporary staging explores the damaging physical and psychological effects of political ambition on those who seek power for its own sake.

Tickets for performances are available at Tix on the Square and at the door. The smash comedy hit of the London and Broadway stages, this much-revived classic introduces the fussy, cantankerous novelist Charles Condomine, re-married but haunted (literally) by the ghost of his late first wife, Elvira, who is called up by a visiting “happy medium,” one Madame Arcati. Seeking revenge at being forgotten, Elvira seeks to disrupt Charles’ marriage to his second wife, Ruth.  Hilarity ensues as Charles tries to hide his haunting and keep both his wives happy!

Concordia University of Edmonton’s “Theatre at CUE” has two main stage productions each academic year – one in Fall (October/November) and one in Winter (March).

Our productions are directed by a faculty member or a guest director from Edmonton’s professional theatre community and every second year we produce a musical theatre piece. Auditions are open to all CUE students, and those with the appropriate prerequisites can gain credit for participation in the productions.

CUE’s independent drama club, Green Thespians Collective (GTC), also sponsors a student directed Festival of One Acts in the Fall Term – usually in December – and a Fine Arts Carnival of Theatre, Dance and Music in the Winter term – usually in April.

See the Events calendar for audition and performance dates – select the Drama calendar from the Categories to see only Drama events. 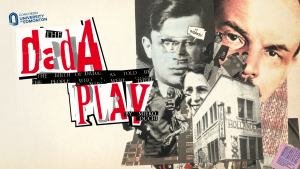 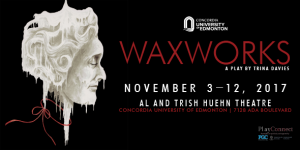 Take a sneak peak at these videos of Waxworks!

Fall 2016 – Haroun and the Sea of Stories by Salman Rushdie adapted by Tim Supple and David Tushingham, Directed by Caroline Howarth, choreographed by student Olivia Babiak