Due to the unusually early winter weather, the Thunder Women's Soccer team played the 'home team' NAIT Ooks on a neutral turf field in Sherwood Park this past Sunday. The field of play or the setting was enclosed by a perimeter wall of snow and filled with brisk air, ideal setting for another fall classic between the two women's programs.  It may have felt like winter, but the action on the pitch was heated.  The two teams exchanged chances in the first half, but it finished with no score.  In the second half, NAIT scored to take a 1-0 lead in the 62’, but only to be tied by Concordia’s Jaida Stasiuk several minutes later.  Unfortunately for the Lady Thunder, they conceded a second goal late in the game and lost 2-1.  The game was not without controversy with some inconsistent calls throughout the match. NAIT also led the game in fouls, but yellow cards were tied at two per team.  When asked about losing twice to NAIT this season, Coach Imbrogno replied, “Our season is far from over…We have sowed the seeds this year; we’re looking to harvest in a couple weeks at soccer provincials.”  Concordia will be hosting that ACAC Women's Soccer Championship from October 28th to 30th and the possibility of the two teams meeting up again is a distinct possibility. But first, Concordia needs to focus on next week’s final two regular season games against Augustana and Keyano. Both games will be home affairs with Saturday's game against Keyano going at Noon and the Sunday game against Augustana also at Noon.  Please note the starting time of the Keyano game was originally scheduled to be 2 PM but has been moved up to Noon. 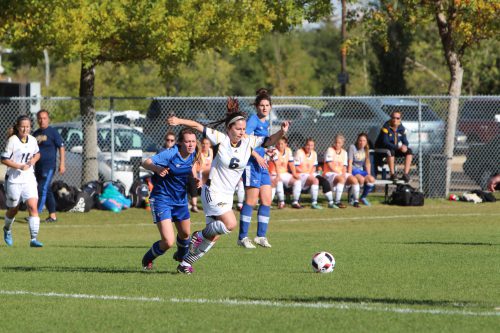