This weekend the Thunder took on the previously undefeated Voyageurs from Portage College. Friday night at home, the Thunder played well and were able to put themselves ahead 3 to 0 by the third period. The Voyageurs were able to close the gap later in the period with two quick goals but the Thunder responded and ended up winning 5 to 2. First year player, Ian McLellan had a pair of goals as did Phil Dillon. Tanner McCorriston made 37 saves for the win.
Saturday night on the road, the Thunder again jumped out to a lead on goals from Adam Wheeldon, Rory Davidson and Phil Dillon. The Thunder however could not hold on this time as the home team came back in the latter half of the game including scoring two in the third period, including an empty netter. Final score was 5 to 3.
The Thunder will now enjoy a bye week before returning to the ice in two weeks for a pair of games at home against the Briercrest Clippers. 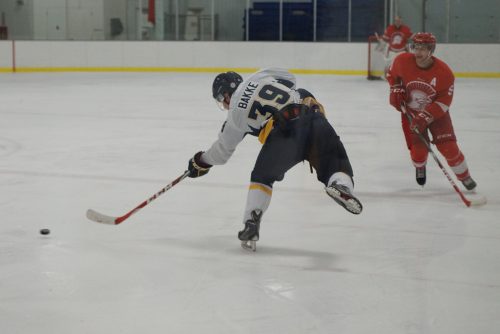