Thunder Soccer Faces the Elements and the NAIT Ooks

"Disruptions, disruptions, disruptions. First it was Thanksgiving, then snow, and finally, NAIT. Yup, those guys again. But each time we get this test we improve, take something away and get that much closer to solving these types of opponents. In this instance a 2-1 result was fair, yet not far away." – Thunder Head Coach Ian Skitch.  In his first appearance of the season, freshman Goalkeeper Aaron Bannard single-handedly kept the NAIT Ooks out for the first 40 minutes until a dreadful error dealing with a back pass put the hosts up by one. Despite some good pressure from the Thunder, it could have been 3-Nil for the hosts without some goalkeeping heroics from Bannard. Within 6 minutes of the 2nd half restart the Thunder had put the game back on level terms and pushing the Ooks after an Anass Drissi finish from close range. But alas, a lapse in concentration gave NAIT the opening it needed to regain the lead and ultimately seal the points.
The Thunder will finish the regular season this coming weekend with a two game home stand.  On Saturday, they will host the Keyano Huskies at 2 PM and on Sunday, the Augustana Vikings at that same 2 PM start time. Please note the change in start time for the Saturday game; the game was initially scheduled to start at 4 PM but has been moved up to 2. 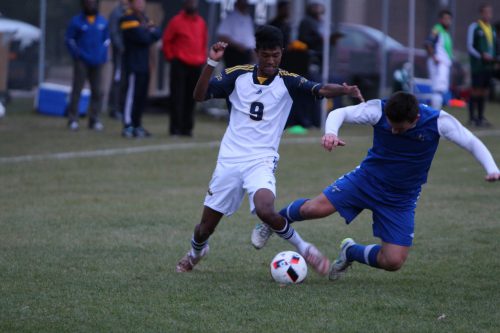