This weekend the Thunder Women’s Basketball squad took on the Vikings from Augustana in a home and home series.  On Friday night at home, the Thunder jumped out to an early lead. “Again we were sharp in the first quarter. We did a lot of good things, especially getting to the free throw line as we shot 17 out of 20 free throws. We wanted the girls to be aggressive on the offense, not to settle for jump shots and they did.” Going into halftime the Thunder were up 31-28. “Great first half for us. We controlled the first 20 minutes of the ball game. Now we need to learn to control the last 20 minutes," stated Coach Valpreda. In the second half, the Vikings came out with energy and hustle, taking a 10 point lead into the 4th quarter. “We have to learn how to match other teams when they go on runs. We beat ourselves when we back away; we have to learn how to match their intensity.”   The Thunder battled back to within 3pts but in the end the Vikings won 64-59. “(Once again, it was) another close match up. We played very well overall, but we need to fine tune some parts of our game. We had a small window where we made some poor decisions and Augustana jumped all over it,” said Valpreda.  Player of the Game was Nakita Newman.
On Saturday night, the Thunder visited the Vikings out in Camrose. “This is a tough gym to play in. They have a great crowd and atmosphere so we need to stay focused and not let the outside noise distract us from our game plan.”  The Thunder's defense set the tempo and they did an excellent job on rotations and boxing out and at the half, found themselves down by just one point after Lindsay Piper hit a clutch 3-pointer just before the buzzer. In the second half, the Vikings came out with focus that made the point that this was their home court. “We found ourselves down 7 quickly, but a couple key baskets by Ann Stewart and Nakita Newman helped us stay in the game.” As the half wore on, the Vikings began to assert themselves and went up as much as 14pts. “This is where we as a team have to learn that this game is played for 40 minutes. Unfortunately when we let our guard down, other teams take advantage." In the end, the Vikings won 68-56. In spite of the loss, Coach Valpreda sees positive results on the horizon. “I’m proud of our team tonight. They worked hard and they supported each other. This is a resilient group and we keep getting better each time we play. Rome wasn’t built in a day.” Once again, the Player of the Game was Nakita Newman.
The Thunder will have a week off before they get back on the court to challenge the King's Eagles on November 13th and 14th. 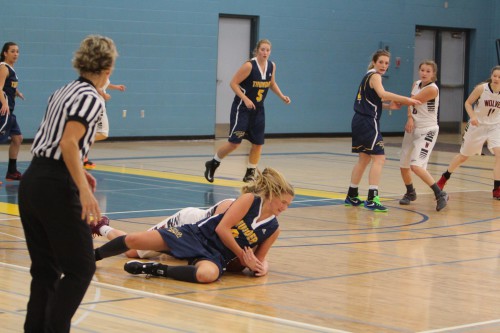