This past weekend, Thunder Women’s Basketball went up against the top team in the North – and the 7th ranked team in the nation – the NAIT Ooks. Friday night's tilt at the RKAC was a physical affair that saw the Ooks go up 25-18 after the first quarter. “We were playing well but we needed to do a better job at contesting their perimeter shots as NAIT likes to shoot a lot of 3’s,” explained coach Valpreda. Going into halftime the Ooks were up 45-32. Coming out of the halftime, the teams traded baskets for most the quarter but it was the leadership of Shyanne Walton that sparked the Thunder.  The Captain did all she could, getting on loose balls, pushing the tempo in transition and supporting her teammates in every facet of the game. Her effort and enthusiasm was contagious on the Thunder bench as the teams matched points in the 3rd quarter at 13 apiece. Fourth year Guard Jordan Lembryk – whose stats don’t always show up on the score sheet – did an outstanding defensive job on Torey Hill. “Jordan is tough. She battles, she works hard and she does all the little things; she held Torey to 12 hard-earned points.”  In the end the Ooks took the win 77-57 over the Thunder. The Thunder battled all four quarters and NAIT hit some tough shots. “They shot 20 3-pointers and we gave them 9 of them. We knew they live and die by the 3 and tonight they made them," concluded Valpreda. Congratulations to Shyanne Walton who was the Player of the Game.
Saturday Night the Thunder was looking to bounce back on the Ooks court.  They responded with a fast start, taking the first quarter and continuing that momentum in the 2nd. “We looked great. This is the most focused I have seen us all year. We're making the adjustments that we talked about and playing really well,“ glowed Coach Valpreda. Going into halftime the Thunder were up 24-23. However, it would be a big task for the Thunder to keep that focus and stay on course for the next two quarters. As the second half began the Thunder continued to play hard, jumping out to a 12pt lead in the 3rd quarter. “All I could say in the timeouts was to keep going, keep doing what we have been doing. We're playing well; stay positive with each other.”  However, led by their veterans, the Ooks would battle back and cut Concordia’s lead down to 2pts going into the 4th quarter. In the 4th, it was both teams trading baskets right until the end forcing the game into overtime. Pushed to the limit by the Thunder, the Ooks rose to defend their home court and took the win 66-61. Even though the Thunder didn’t get 'the W', they made a statement to the top team in the North. "The execution of our game plan was superb. It’s the best this team has played yet,“ crowed Valpreda. "I’m proud of these girls. Of course we wanted to walk out of there with a win but we challenged the top team in the north, the #7 team in the country to overtime on their court.  We bounced back from a 20pt loss the night before and had the character and toughness to do that. I’m very proud to coach such a great team.”
Concordia has a lot to look forward to going forward into the last few games of the 2016-17 season. Lacey Weddle is starting to come into the player the coaches know she can be, Ann Stewart is becoming the inside presence everyone knew she could be and the rest of the team is continuing to get better each practice. Congratulations to Nakita Newman who was the Player of the Game with 20pts, 3 steals and 4 rebs.
The Thunder will have a bye weekend coming up before they finish off their last four games of the season at the end of February. 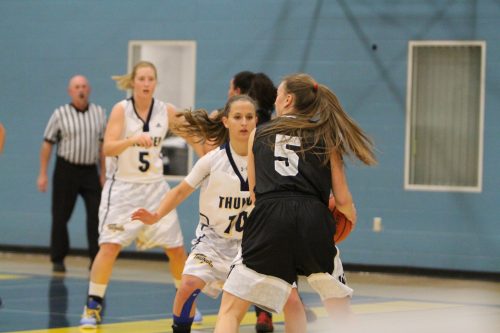