The Thunder Badminton team played host to the rest of the ACAC this past Sunday and finished with another solid 2nd place team performance. Takeisha Wang led the Thunder again this weekend with a first place finish in the Women's Singles category and a 3rd place finish in Mixed Doubles with her partner Braxton Wong.  Connor Reinson continued to battle through some injuries but also managed a respectable 4th place finish in Men's Singles.   Braxton Wong and Kassidy Turcotte both won the consolation side for Men's and Women's Singles, respectively.   In Women's Doubles, Rachael Smillie and Amanda Cao finished in a solid 3rd place and teammates Kassidy Turcotte and Cecilia Wolski finished in 4th place.  Kaylee Morris and Teisha Ouellette also had a strong performance winning the consolation side in Women's Doubles.  In Mixed Doubles, Connor Reinson and Rachael Smillie also finished in 4th place.
Overall it was a great performance by the Thunder and they look forward to the ACAC Championships in a couple weeks in Olds where they will be trying to go for the gold in the team event as well as qualify some players for Nationals.  "The Thunder have many great chances to qualify athletes and if they continue to improve and push hard the next couple weeks, I think there will be some great results for team," vowed Head Coach Kevin MacAlpine.  The Thunder will indeed head down to Olds College to contest the ACAC Championships on February 18th and 19th. 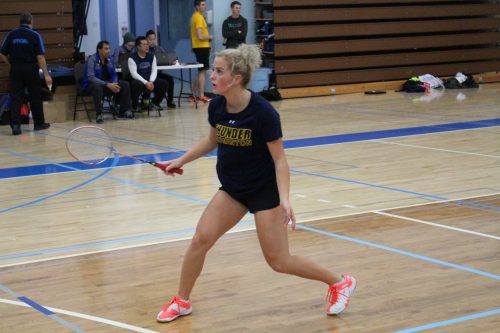