In a battle for 1st place, the Thunder and Ooks squared off this past weekend in the most crucial series of the year. Game one at the RKAC would be an uphill battle for the Thunder as they fell behind by 11 points at the half. The Thunder were able to cut that deficit to 3 late in the 4th but were unable to find a way back on top and saw their CCAA best 14 game win streak come to an end with an 84-76 loss. Leaders for the Thunder – Ryan McLaren with 18 points and 8 rebounds, Mike Malin with 17 points and 5 rebounds, Brett Jakubec added 14 points, 6 rebounds and 4 assists with Kwame Kang coming in off the bench to score 12.
The rematch at NAIT would again start slow but a furious rally in the second quarter had the Thunder up 2 heading into the break.  Coming out of the gates strong in the 3rd, the Thunder would push their advantage to 10 by the end of the 3rd and wind up finishing off the Ooks by a final score of 96-75. Leaders for the Thunder – Ryan McLaren with 26 points, Mike Malin notched a huge double double with 14 points and 14 rebounds and Bevan Purnell set a new career high with 14 points along with adding 5 rebounds.  Ben Grimsrud, Brett Jakubec and Kwame Kang all added 10 apiece in a very balanced night for the Thunder. “(It was) tough to lose the Friday game in our own gym but we answered the challenge well on Saturday at NAIT,” said Coach Reagan Wood. “We have to continue to work towards playing that ever-elusive 40 minute game.  When playoffs roll around we cannot afford to have slow starts or lapses in our decision making for any kind of extended stretch.  Our goal is to be ready for March and we still have 4 more tough league games to help us get there.”
The Thunder will enjoy some time off this coming weekend and resume ACAC North play on the 17th with a trip to Camrose to face the Augustana Vikings. 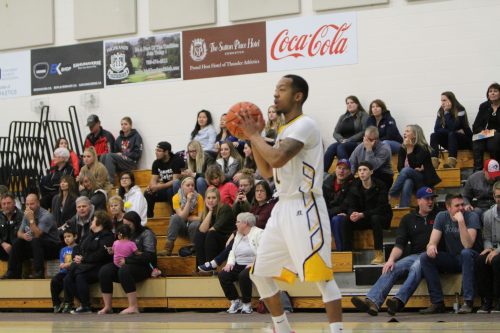