The Thunder Women's Volleyball team played a pair of pair of home games this weekend, welcoming the Lethbridge Kodiaks to the Ralph King Athletic Centre.  Although both matches were highly entertaining, the Thunder just could not quite get ahead of the Kodiaks and lost both matches in straight sets.  "We started Friday very flat and never quite came up to speed," stated Head Coach Sherri Milne. After dropping the opening set 25-14, the Thunder regrouped and battled back in the second set, going point-for-point with the Kodiaks.  Unfortunately, they were not able to finish off their opponent and ended the game on the short end of a 25-15 decision.  The final set saw them fade out to a 25-15 finish. Rookie Left Side Amy Davies played a strong match and was named the Player of the Game for the Thunder.
In the Saturday afternoon matinee, the Thunder hit the court as a much more determined squad. "We regrouped and prepared more on our mental part of the game but once again we were simply unable to reach 25 first," lamented Milne.  As it was in the second set on Friday night, the first set on Saturday afternoon saw the Thunder going point-for-point with the Kodiaks but fading in the latter stages of the set and having to settle for a 25-21 loss.  That result seemed to deflate the Thunder and they dropped the final two sets 25-15 and 25-17. Second year Libero MacKenzie Bouchard captured Player of the Game recording 17 digs in the contest.
Next up for the Thunder is a home and home series with the SAIT Trojans.  The home game goes at 6 PM on Friday, January 24th with the return match down in Calgary on Saturday night. 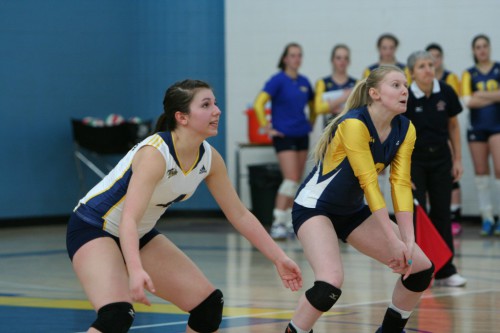