This weekend the Thunder Women’s Basketball team travelled to Calgary to take part in the Sait Fall Classic Pre-season basketball tournament. On Friday the women played the St. Mary’s Lightning from Calgary. The game opened up in a back and forth contest with the Thunder holding a small lead at the end of the first quarter.  Going into the second, St. Mary’s started to take a small lead but the Thunder fought back to go into half time with a 29-29 tie. “Transition in the first half was good for us,” said Coach Valpreda. “This is our first game of the year (and) we are still working out all the kinks.” Starting the second half, the Lightning jumped out to an 11-point lead. “Our focus this year has to be good for all four quarters,” explained Valpreda. With a strong effort, Concordia battled back to tie the game with two minutes left but fell short, losing by a final score of 68-65. “We missed three open lay-ups and shot 30% from the free throw line and lost by three. Our decision-making and finish have to get better."
On Friday night the Thunder were going up against the best team in the conference facing the Kodiaks from Lethbridge. “This team has veterans and ex-CIS players on its roster. We know what we're up against and we have to be ready for the challenge”. As the game started the Thunder came out running. With three quick baskets the ladies took an early 8-2 lead.  As the game continued, it became a really physical battle on the court. “We have to learn to play through adversity,” stated Coach Valpreda. Going into halftime the Thunder were down 42-20. "Don’t let the score dictate the game; I’m happy with that. We played well and continue to play well against the favorites this year. We are one of the youngest teams here and were staying with the best.” As the second half started, the Kodiaks went for the kill. They passed the ball well, shot well and rebounded well, not giving the Thunder any chance for a comeback. "We still worked and played well but we had no effort in the second half. Effort is something that gives us confidence. When we have confidence we play well, we transition, we rebound and we play together,” concluded Valpreda. Final score in the contest was 74-36 for Lethbridge.
The final day of the tournament saw the Thunder take on the host SAIT Trojans in an afternoon match. SAIT ended Concordia’s season last year in the playoffs and it started where it left off. “We knew we had to be better than yesterday,” said Coach Valpreda. “Our strategies were fine but our effort had to be better than the last two games.”  As soon as the ball was thrown in the air the Thunder took flight. Running the floor extremely well was 4th year Guard Karolina Wieczorek. “We rebounded well which gave us the chance to run.” Going into halftime, the
Thunder were up 41-34. SAIT battled back in the second half and started to make shots from the perimeter but the leadership from the returning players played a huge role as the Thunder were able to hold on for the 70-60 win. “This tournament was a great experience for us to see what we have to work on and what we do well. Our goal each game is to be better than the last game.” Congratulations to Aly Bridgeman, Jessica Freitag and Karolina Wieczorek who all received game all-star honours.
The Thunder will wrap up the pre-season this Friday when they play host to the 'SkyLights' from Montana State University Northern.  Game time is 6 PM at the Ralph King Athletic Centre. 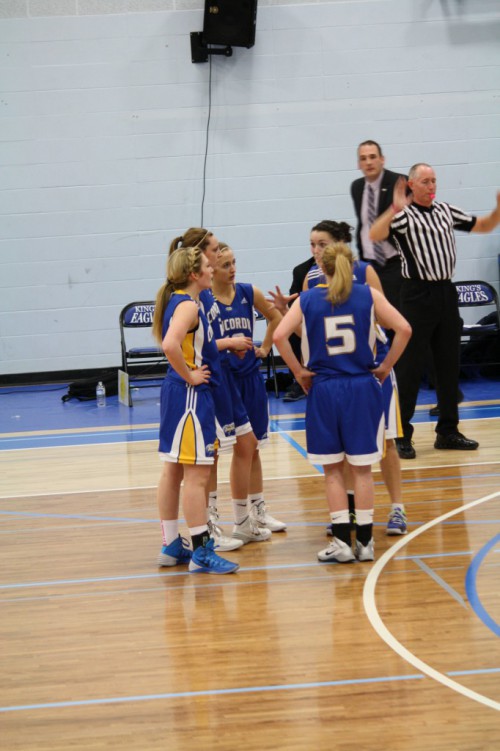