The Concordia Thunder Women's Volleyball team participated in the Annual Wild Rose Tournament hosted by Red Deer College this past weekend. With 12 teams in the tournament, it gave the team an opportunity to play some quality teams and see how they matched up with each of them. Their first match was against the Red Deer Alumni and although the ladies lost in two sets 13-25 and 20-25, the play was very entertaining and they competed hard against a very good team. The next match was against SAIT and again it was a match where the ladies competed for each point but could not finish and lost 25-22, 25-21. This put them 3rd in their pool and their cross over match was against King's University College. In this match, the team came out right from the start and dictated to the Eagles how the match was going to be played and won the first set 26-24. In the second set, the team lost their focus right from the start and King's elevated their play and won 25-11 setting up the third and deciding set. In the third the team came out flying and got up 7-0 and did not stop playing until the last whistle winning 15-7.
With the win under their belts, the team went up against the host team, Red Deer College in the quarterfinals. The defending National Champions came out with a purpose right from the start and kept the Thunder ladies off balance throughout the match.  Concordia could not recover and lost 25-13, 25-21.
After the loss, the team focused on finishing the tournament on Sunday playing two matches to determine placing in the tournament. Their first match in the morning was against a very good team from Lethbridge College and it was a great match for both teams as they went back and forth to earn the win. In the end, the Thunder came out on top in three sets, 25-23, 8-25, 15-12. The last match of the weekend for the team was against NAIT and although they played well at times, the Ooks kept the ladies off balance and they lost 25-11, 25-15. The Thunder finished in sixth place out of twelve teams so overall it was a good tournament for the team. Coach Turner commented on how he felt the tournament went. "Overall it was a great tournament for the team as we played some very good teams and for the majority of the tournament we competed hard against these teams. We have solidified some starting spots for the upcoming regular season and we have found our identity as we get ready to compete in the tough ACAC North division."
The team will open up their regular season October 17th as they travel to Lloydminster to face the Lakeland College Rustlers. Their home opener is on October 18th at 6:00pm as they host the same Lakeland College Rustlers at the Ralph King Athletic Centre. 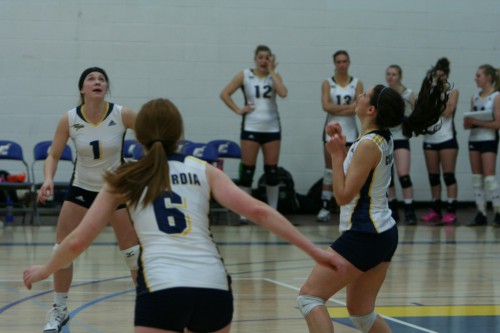