The Concordia Thunder Women’s Basketball team kicked off the 2014-15 ACAC campaign this past weekend in a home 'n' home series with the Lakeland College Rustlers. On Friday night the Thunder had their home opener at the RKC. “This is the start of an exciting season,” opined second year Head Coach Robbie Valpreda. As the game began the Rustlers saw the potential the Thunder hold this season. “We ran the ball well and we were hitting shots in the first quarter”.  The Thunder did an exceptional job with their size in the post. “We may be undersized in some areas but what we lack in size we make up in heart. Fourth year player Meagan McIntosh is an excellent example of this; she comes out every game and is both physical and tenacious.” Going into halftime the Thunder saw themselves down just six points. “The effort was great in the first twenty minutes. I was impressed with the way we were playing. We have a lot of potential but again we have to stay focused mentally for forty minutes.” The beginning of the second half saw the Thunder battle back to tie the game. “We worked hard, we moved the ball well and our decision making was better.”  As the third quarter game to an end, 3rd year Guard Aly Bridgeman hit an incredible shot from the half court at the buzzer. “Aly’s shot was really something; something only Aly could do”. As the fourth quarter began, the Thunder surged forth, spurred on by Aly Bridgeman's leadership and effort and found themselves down just four points with five minutes left. “We have to learn that at crunch time is when we need to be at our best; we're still learning and gaining the experience to be better.”  The final five minutes of the game took a toll on the Thunder who went down with a 69-56 loss. “We gave up 27 offensive rebounds for Lakeland and we committed 31 turnovers and (yet) we were down just four points with five minutes left. We have to be better at making decisions and remember that when we box out we need to create contact first and then get the ball,” concluded Valpreda. Congratulations to Aly Bridgeman who picked up well deserved Player of the Game honours.
On Saturday the Thunder travelled to Rustler nation for game two. The game began with the Thunder again leading by 19-7 early. “I know what I get from my team in the first twelve minutes. It’s the last twelve minutes that we need to be better at.“ The Thunder again came to play and had the Rustlers on their heels. But the Rustlers battled back to finish the first quarter up one 19-18. “We stopped moving the ball for some reason. When we move the ball good things happen.” Going into the second quarter the Thunder found themselves back in the game tying it up at twenty six apiece. Halftime saw the Thunder down by 7, 36-29. “Great first quarter for us. We did a lot of good things; our help side defense was better, our communication was loud and our decision making was at our best." The second half started with the Rustlers taking a much different approach than the first. Lakeland came out firing on all cylinders. They became more physical and their desire to want and to win the game was higher than that of the Thunder. “They pushed us, they hit us, they beat us to rebounds and we didn’t fight back. We know it's early and we're learning but we also have to remember that we need to be in it for the full forty minutes. We are going to have to grind it out and earn everything this season. As the coaching staff, we saw a lot of positives and see the potential we have."  Unfortunately, the level of the play on the court did not translate into points for the Thunder and they fell to the Rustlers 72-49. Meagan McIntosh was named Player of the Game.
The Thunder will now look to play two 'away' games next weekend when they head over to NAIT for a two game series with the Ooks.  The unusual scheduling sees the Thunder tip off on Friday night, October 24th at 7 PM and then again on Saturday at 6 PM. 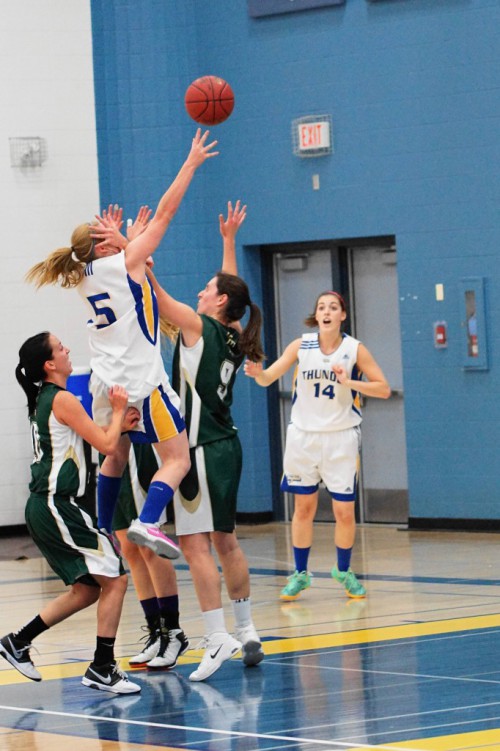