The Women’s Basketball team began their New Year with a tough road trip up to the Wolves den in Grande Prairie.  The Wolves come into the New Year sitting in 3rd place in the ACAC North and the Thunder knew that playing in the Den would be a tough task. Not only did the Thunder have a challenge playing in a hostile environment but they had not played in over a month and had to 'shake off cobwebs'.  As the game tipped off, both sides looked a bit rusty but the Thunder quickly established an excellent defensive presence but could not convert on the offensive end. “We started the game seemingly unable to pass or catch the ball. We defended well but we could not get it going for the first quarter due to turning the ball over,” stated Head Coach Robbie Valpreda. After the first quarter the Thunder just found themselves down two points. Going into the second quarter is where the Thunder started to dig themselves a bit of a hole, being outscored 19-4. Going into halftime the Thunder were down 29-12.  The women had 20 TO’s at halftime and shot poorly from the FG. “We knew we had to be much better at competing in the second half. We had to put a better effort forward if we wanted to see things turn around.”  In the second half, the Thunder were able to get stops and scores cutting the Wolves lead down to just 6 points, but in the end the Wolves took the win 57-50. “We were much, much better in the second half. We missed 11 free throws in the second half and some uncontested lay-ups, but our effort was better and gave us a chance to win.”  The Player of the Game was Sofia Lucadello.
On Saturday afternoon the Thunder returned to the Wolves den and started off with a flurry of offensive punches. The Thunder were the beneficiaries of having their Captain and leader Shyanne Walton back from a first semester injury. “Having Shy back in practices has helped us. Although we played well in the first semester without her and Michaela Barkwell did a great job developing at the point guard position, having Shy back helps us and everyone on our team.”  Going into the halftime the Thunder were up 35-20. In the second half, the Thunder picked up where they left off and with every basket the Wolves scored the Thunder matched it and in the end, came away with the 57-52 victory. “I was really proud of them today. They responded well from last night, they all played hard, they all hustled and everyone contributed,“ beamed Coach Valpreda.  Congratulations to Nakita Newman who had a huge game, scoring 13 pts and 15 rebounds as the Player of the Game. 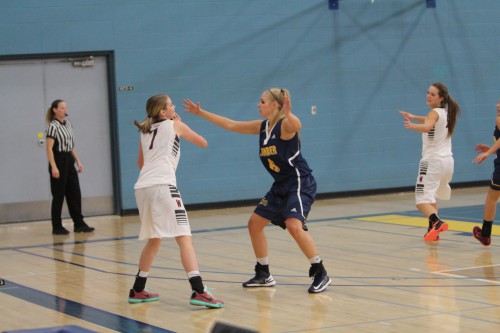