This weekend the Women’s Basketball team took on the ACAC North Division's third-seeded team, the Vikings from Augustana. Coming into Friday's home game, the Thunder were looking to improve from last weekend's positive results. The game started as a very physical affair, with a lot of contact on both sides and each team having to earn every basket. As the first half progressed, the game settled down into 'cruise' mode with the Vikings in the driver's seat. "They were shooting the ball extremely well and beating us in the paint, opened Coach Robbie Valpreda. “They shot 45% from the three point line and had us create 20 turnovers going into half time. Our adjustments had to be boxing out and limiting our turnovers. We were giving them every opportunity to score because we kept turning the ball over."  In the second half, the Thunder came out with renewed fight. “We battled back again; we got ourselves back into the game cutting the deficit to ten points.“  But once again, the Vikings' precise shooting and aggressive offensive rebounding stretched their advantage to 16 points. In the end, the Thunder fell to the Vikings by a 71-58 margin. “We lost by 13 pts, we had 31 turnovers and shot 33% from the free-throw line. We simply didn't play like we are capable of playing," concluded Valpreda. First year Forward Katlin Handel was named Player of the Game.
On Saturday the Thunder travelled to Camrose for the rematch with the hometown Vikings. “Playing here is tough; it’s a tough gym to win in. They have an excellent crowd and they feed off of that.”  The Vikings began the game where they left off the night before, shooting the ball extremely well and finishing at the rim. After the first quarter the Thunder were down 21-13. “We had to get our feet wet before we made our run. We let them get into rhythm before we made our push,” stated Valpreda.  That’s what the Thunder did as they started the second quarter scoring at will, moving the ball and passing to the open player to knock down shots. The Thunder pressed and had the Vikings turn the ball over, taking advantage on the scoreboard. Even with the Vikings shooting 22 free throws in the second quarter the Thunder were down just 36-34 at half. “We played very well in the quarter. I told the girls it's never easy. We are going to have to battle through everything that is thrown at us”. In addition to battling on the court, the Thunder had to 'battle in the infirmary' as this season's team spark plug, Alyssa Bridgeman went down with a very bad ankle injury. “It's very unfortunate. Aly really sprained her ankle; she had to be taken off in a wheel chair and taken to the hospital. We know she’s tough and will be back, but in the meantime we had to continue the fight without her and it was a tough blow to take.”  As the 2nd half unfolded, things continued to bounce the Thunder’s way. “Shyanne (Walton) stepped up again for us tonight," enthused Valpreda.  She is going to be a HUGE factor for us in these next few games. Her ability to shoot the 3 and pass the ball has improved not only her performance but that of everyone playing around her."  With 1 minute left in the game the Thunder were up 55-53 and as the clock ticked down, that minute began to feel like an hour. With 34 seconds left, the Vikings got to the rim and made a play wherein they got the hoop and the foul. With 13 seconds left the Thunder were down 58-56. "We wanted the ball in Shy’s hands. She has been doing well and she took the right shot, it just didn’t go in. Excellent effort but we just fell short.” In the end, the Thunder had to accept the heart-rending 58-56 loss. “This was our toughest loss this season. The girls battled and battled on the court and we went through additional adversity, with Aly going down and through all that, lost by just two points! I’m so proud of these girls. We played to a top team last weekend and lost by just 9 (points). Tonight we made the changes needed and went from losing by 13 pts to taking the Vikings right down to the wire. These girls are awesome and they showed grit, character, toughness and heart. I couldn’t be prouder than I am now to coach such a great group of athletes,” emoted Valpreda. Congratulations go to Shyanne Walton for being named Player of the Game with 17 pts and 8 assists.
The Thunder's next action will be on Friday, January 30th when they head across the bridge to take on the King's University Eagles.  The home rematch will go Saturday night at the RKAC. Tip off time for both games is 6 PM. 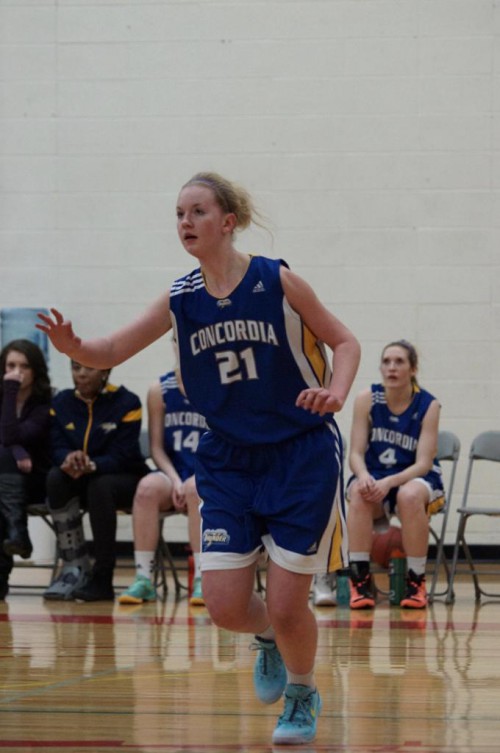