Thunder Men Get an Early Start to Indoor Track Season

The core of the ACAC XC Men’s Championship team got an early start to the 2015 Indoor Track season this past weekend at the Golden Bear Open, hosted by the U of A.  The defending Men’s 4x400m ACAC Indoor Champions decided to mix things up with a few of the top teams from the CIS and ended up running their 2nd fastest time in history, just a half second off the school and ACAC record.  Co-captain Ben Thomas got things going for the men, handing off to rookie Mike Quick who passed the baton to U of A transfer Kirk Sundt while Co-captain Kevin Chambers brought the team home in 4th place overall, losing to a strong University of Victoria, University of Regina and the host Golden Bears.  “That was fun. The guys did a great job out there mixing it up with the CIS crowd and they are only going to get faster from here.  It’s going to be very tough for anyone else to touch these guys this year, especially when you put Kenton (SAIT transfer) in there as well,” enthused Head Coach Matt Norminton.  On Saturday, Kirk Sundt ran the 2nd fastest 1500m in school history for the men while Chambers ran a very smart race and a solid time in the same race.  “Kevin will be back under 4:20 in a few weeks. That was a really smart run and I think Kirk can be under 4:10 this indoor season,” stated Norminton.  The rest of the Thunder Indoor Track teams will race this Sunday down in Calgary at the U of C's 'Dino Challenge'. 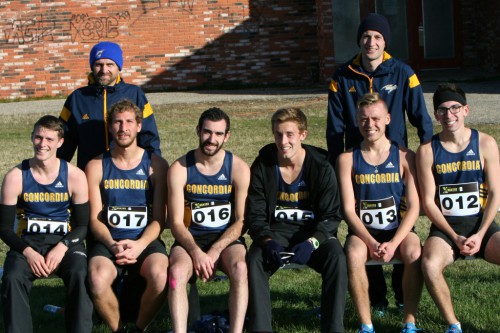