This weekend the Women’s Basketball team matched up with the undefeated UofA-Augustana Vikings. On Thursday evening in Camrose, the Thunder started off well, scoring the first buckets of the game. Going into the second quarter was a different story as the Thunder gave up 26 points to the Vikings to find themselves down 39-17 at halftime. “We lost our focus in the second quarter. We were not disciplined in boxing-out and playing defense as we allowed them second chance opportunities. We continued to foul them, allowing them too many chances at the free throw line,” lamented Head Coach Robbie Valpreda. As the second half unfolded, the Thunder regained their composure, playing much better defense and limiting the Vikings to only one shot. Unfortunately, the Thunder had dug a hole that was too deep to climb out of and they fell to the Vikings 54-40. Stalwart third year veteran Aly Bridgeman had another good night and was honoured as the Player of the Game.
Saturday night saw the Vikings travel to Thunder Country and this time the Thunder had a much better effort. “We started well, we moved on offense and we played defense,” stated Coach Valpreda.  The Thunder got through some adversity with key players getting into foul trouble early, but the young bench came into the game holding their own against the Viking veterans. Going into the halftime the Thunder lead 22-20.  When the second half began, both teams were slow off the mark. “We played tough and our players that had foul trouble came back into the game and showed their maturity as they began to contribute.” Going into the fourth quarter, the Vikings held the lead in the low scoring contest, 33-30. “We were still in the game. We missed a lot of lay-ups and free throws but we were still in the game,” opined Valpreda. As the fourth quarter started the Vikings started to pull away, sinking three consecutive three pointers. However, the Thunder didn't back down and answered the Vikings with buckets of their own. Unfortunately though, it wasn't quite enough as the Vikings managed to hold on for just a four point victory, 52-48. “We shot just 40% from the free throw line in the second half,” bemoaned Valpreda. “We have to be consistent for forty minutes. This league is tough and when we have lapses, we can find ourselves in a big hole in a big hurry. There was a lot of positives in tonight’s game. Our players coming off the bench stepped up and again we got through adversity when it came calling. We played together and we showed character, but we need to take care of the little things to help us close out games. Being a young group, we have to pay attention to every little detail,” concluded Valpreda. Rookie Geri Anstice was named Player of the Game.
Next up, the Thunder will be looking to get into the win column when they play a home and home against the King's Eagles.  The action tips off Friday night at 6 PM at Concordia with the weekend closer going the next night at Kings. 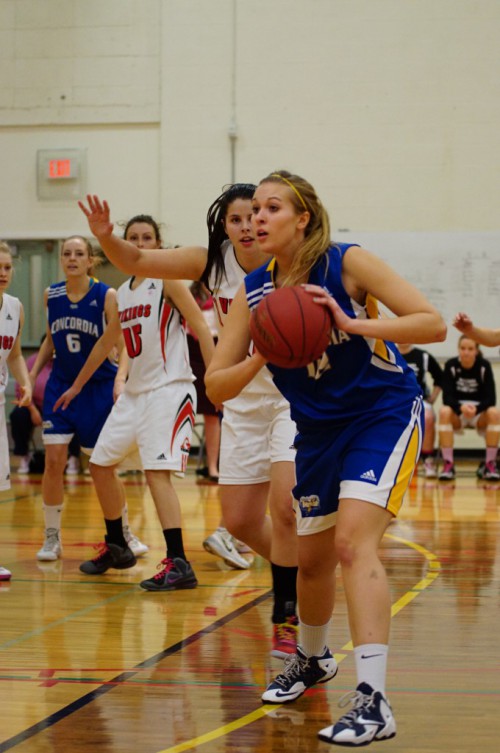