The Thunder Men's Volleyball team took to the road this weekend to compete in their first pre-season action at a tournament held at Ambrose University College in Calgary.  Action in the 'Lion's Den' saw the Thunder open the tourney on Friday afternoon with a five set victory over Lethbridge College 25-23,18-25,21-25,25-22 and 17-15. Next up for the Thunder on Friday night were the SAIT Trojans.  Although they pushed the final set to extra points, the Thunder fell to the Trojans in three straight 25-14,25-18 and 27-25. On Saturday morning, Concordia found themselves in a rematch with Lethbridge and once again, they grinded their way to a 3-2 victory 25-17,24-26,26-24,20-25 and 20-18.  In their final matchup of the tourney, the Thunder faced the host Ambrose Lions.  Close match play provided for a very entertaining game with Ambrose edging out the Thunder in four sets 25-20,25-22,23-25 and 25-22. New Thunder Head Coach Shamus Dowler was pleased to see how well his squad performed so early in the season. "We were led by standout performances from rookies Ryan Teliske and Cole Davis and veteran Josh Gaudet."
The Thunder's next pre-season action will be on October 3rd when they host the Lakeland Rustlers. 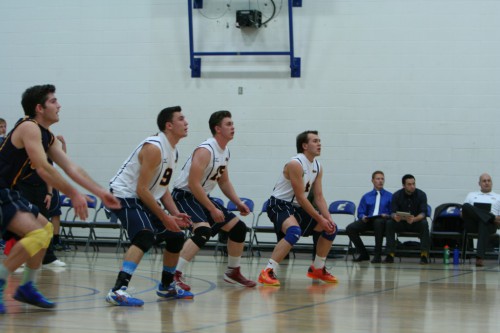