The ‘Hats Come Off’ for Thunder Women’s Soccer

This past Saturday, the Concordia Thunder Women's Soccer team steam rolled to an 8-0 victory over the visiting Huskies from Keyano College in Ft. McMurray.  Playing their second game in less than 24 hours, Keyano demonstrated little defense against the home town Thunder.  Led by second year player from Austin O'Brien, Concordia's Jill Sander scored a hat trick in the first half before the feat was repeated by Archbishop Jordan alumnus Kaitlyn Diduck with three goals of her own.  "Outscoring your opponent is obviously the key to any victory," said Coach Imbrogno. "But what needs to happen in order to score is the buildup."  The forward mobility of the Concordia women was in high gear and their technical ability to move the ball created numerous opportunities in the attacking zone.  "It was great to see players like Brynn DeVries control the flank and Anne Perrault getting to the majority of balls in the attacking zone to make penetrating passes into the channels for scoring opportunities.  Without those types of plays, we don't score."  It is a young season with many learning curves for this rookie laden roster but on this day they looked like a well-seasoned team.
The Thunder will continue their home stand with a double header this coming weekend.  On Saturday, September 20th, the Thunder will play host to the Augustana Vikings at Noon and will follow that up with their second home game of the weekend on Sunday, September 21st at 2 PM when they host the King's Eagles. 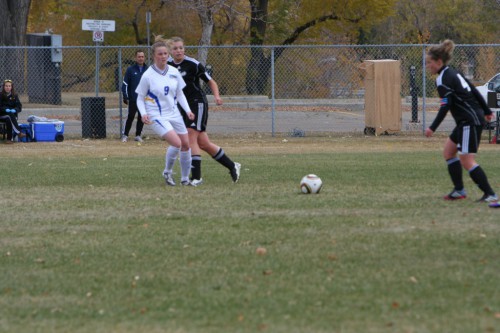