Thunder Men's Soccer are still a team in search of a clear identity. Is it Resolute & Resilient or Concede & Capitulate? Once again we saw signs of both this past weekend despite collecting 4 of 6 points and obtaining their first "W" of this campaign. On Saturday, after looking like a proper team and dominating Augustana completely for 65 minutes, the wheels fell off when conceding terribly from a quick counter attack followed by a soft but unnecessary sending off. The equalizer came from literally the last kick of the game on an individual error mere moments after catching the Vikings Goalkeeper up on a corner against and missing an open goal on a 90-yard break. Associate Coach Ian Skitch lamented "Silly stuff indeed; (we) may as well have thrown the ball in our own goal!" The game ended in the 2-all tie.
On Sunday with the Captain suspended, a reshaped attacking Thunder team raced out to a 4-0 halftime lead over the Kings Eagles. As the second period unfolded the Thunder became more of a defending team through substitutions. "And why not?" asked Coach Skitch. "Good teams must learn to defend and protect leads. It's called Game Management!" In a bit of deja vu from the day before, the Thunder conceded a pair of soft goals late in the half but hung on to the 4-2 victory, their first of the season. "With 10 goals against in 5 matches this group simply needs to understand that this statistic is not good enough. If the group can get over its defensive frailties, they are a top three ACAC team," concluded Skitch.
The Thunder will now gear up for their biggest road trip of the year that will see them travelling up to Grande Prairie this weekend for a pair of games with the hometown Wolves. 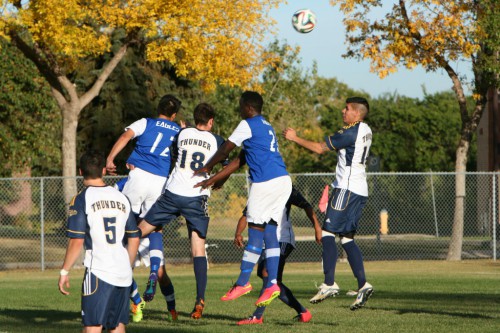