This past weekend the Thunder Men's Hockey team played a home and home series against the Augustana Vikings. The Thunder had struggled against the Vikings in previous games and Friday night in Camrose was no different. Everything that could go wrong did early on for the Thunder as they found themselves down 5 to 0 after the first. A bright spot in the 8 to 3 loss was the play of Filip Kejdana who scored 2 goals for the Thunder.
Saturday night, the Thunder responded to the previous night's loss in a big way as they played their best game of the season. Phil Dillon scored 2 goals including the short-handed game winner as the Thunder defeated the Vikings 3 to 1.  Rhys Hadfield stood tall in the Thunder net and picked up the win. This was the 3rd win in 4 games for Concordia and the team showed great resiliency and determination after a difficult loss in Camrose.
The team will now get a little break as they have the bye this coming week.  They will then prepare for the biggest road trip on the entire Thunder Athletics' schedule when they travel to Caronport, Saskatchewan to take on the Briercrest Clippers on February 20th and 21st. 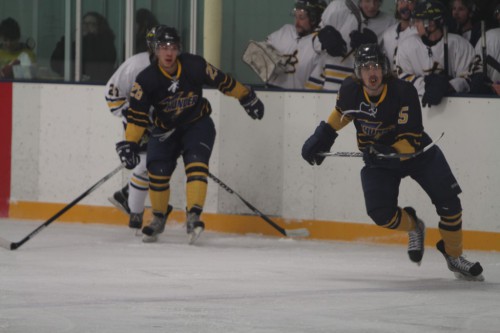