This weekend the Thunder took more positive steps towards securing a playoff spot as they travelled to Caronport SK to take on the Briercrest Clippers. On Friday night after spending most of the day on the bus, the Thunder got off to a great start. Rory Davidson scored on the power play and Phil Dillon added another to help the Thunder to a 2 to 0 lead after 1. In the second period Adam Wheeldon scored both on the power play and shorthanded to establish a 4 goal lead for the Thunder. However the Clippers responded with 3 quick goals and the game once again become a tight contest. Late in the 3rd the Thunder would get goals from Phil Dillon and Chase Fallis to win 6 to 3. Adam Wheeldon was the star of the night for the Thunder with 4 points.
On Saturday the Thunder struggled to find their rhythm despite taking a lead into the 2nd period on goals from Connor Reinson and Brady Bakke. Going into the third the Thunder trailed 3 to 2 but were able to tie the game on a goal from scoring leader Ian McLellan. The game would go to overtime and with 1 second left the Clippers won on a controversial goal that appeared to be gloved into the net. Despite the 4 to 3 loss the Thunder were able to pick up 3 points on the road and now have opened up a 7 point gap on the final playoff spot.
Coach Dan Glegloff was happy with the team's determination. "I thought that our team was able to battle through plenty of adversity in these games. Our special teams was strong and once again our goaltending was the backbone for our team." Adam Wheeldon – who had a 5 point weekend – echoed those sentiments "The team showed some excellent toughness this weekend. It is nice to see everyone contributing and playing for each other."
This weekend the Thunder take on the defending ACAC champion NAIT Ooks and hope to see everyone out to support the team! 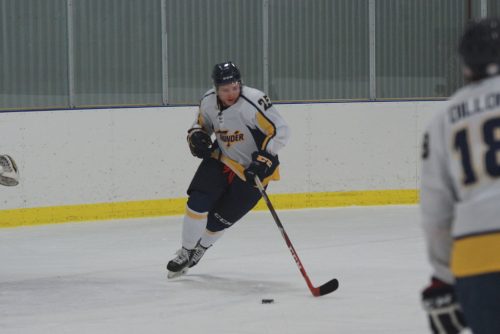