The Thunder Men’s Basketball squad hit the road for the ACAC Championships hosted at Keyano College in Fort McMurray this past weekend.  Before the games got underway, the Thunder received two individual honours as Ryan Coleman and Artez Scharer were named to the North Division All-Conference Team.  Ryan finished the season averaging 19.9 points per game along with 11.6 rebounds (tops in the ACAC), while shooting 57.8% from the field and 84.3% from the free throw line making an incredible 150 of his 178 attempts (also tops in the ACAC). Ryan also registered 17 double-doubles which again led the ACAC.  Artez was no less spectacular averaging 19.0 points per game adding 4.4 rebounds, 4.27 assists and 2.42 steals per game. “Ryan and Artez have been tremendous for us all season,” said Coach Reagan Wood.  “Both (are) new faces to Concordia this season. They had some big shoes to fill from our graduating class last year and they more than answered the bell.  We lost 80% of our scoring from last season and Ryan and Artez came in and led us to be more potent on offense that I had hoped.  Ryan’s energy and work ethic was contagious and everyone knew we could always count on him for a pure effort.  Artez has such a unique skill set; his ability to score and create for others is something we have been missing for a long time.  Watching these two run our screen and roll all season has been impressive.  Every time out, their two man game generated so much offense either directly or by drawing so much attention it opened the floor for others to score.  I’m happy they were both recognized for their outstanding seasons.”
With the individual honours out of the way it was time for the Thunder to seek the ultimate prize – an ACAC Championship and a berth at CCAA Nationals. The first round opponent for the Thunder were the #15 nationally ranked Medicine Hat Rattlers.  A slow start for the Thunder saw the Rattlers go up 8-2, but a renewed effort at the defensive end got the Thunder back to level highlighted by a Ryan Coleman steal and slam.  Two late 3’s from the Rattlers push their first quarter advantage to 18-12 as time expired.  In a gritty second quarter, tragedy would strike the Thunder as 5th year shooting guard Rob Haack would separate his shoulder stopping a Medicine Hat fast break. Sadly, that would be the final moment for Rob in a Thunder uniform. The Thunder kept cutting into the Rattler lead and with 2 seconds on the clock, Tommy Soltys knocked down a corner 3 to draw the Thunder within 1 at the halftime buzzer trailing the Rattlers 29-28.  Inspired at the break and with a will to win for their fallen Captain, the Thunder would jump out on the Rattlers in the 3rd, taking leads as big as 7 points. But as the third quarter wound down another devastating blow hit the Thunder as the Rattlers would throw up an 80 foot prayer that would be answered putting the Thunder down two, 54-52 heading into the fourth and final quarter.  Again the Thunder would battle and go up 3 points, 66-63, but the disparity in trips to the free throw line would be the final nail in the coffin for the Thunder as 10 late free throws put the Rattlers up for good and ended the championship aspirations of the Thunder, downing them 84-74. “(This is) not how I wanted this one to go,” remarked Coach Wood after the loss. “Not in that we lost the game but that Rob had to exit the way he did and not be able to decide his own fate as a 5th year player in his final playoff run.  I can live with a loss; it's hard to take the heartbreak for Rob.  We’ve had so many injuries over the years and they only get worse and worse to deal with.  Rob worked so hard this year to help us be in a position to be successful in the playoffs and to have that chance taken away from him really hurts.  We all know injuries are a part of the game but they are never easy, especially in the playoffs.  Give Med Hat full credit; Coach Price has done a great job building his program and I look forward to more battles with him and his team in the coming seasons.” Leaders for the Thunder in this one: Artez Scharer with 21 points, 6 rebounds, 8 assists and 4 steals and Ryan Coleman with 15 points and 9 rebounds.  Jason Jones Jr. also tallied 15 points with Brett Jakubec coming in – in relief – to score 12 points and add 4 rebounds.
Day two, on the backside of the draw, the Thunder were in a rematch of last year's ACAC Championship game, meeting up with the Red Deer Kings who were upset by the host Keyano Huskies the previous night. The Thunder would battle hard but ultimately fall to the Kings 88-72. Leaders for the Thunder: Artez Scharer 28 points, 5 rebounds and 4 steals, Ryan Coleman with 16 points and 9 rebounds with Jason Jones Jr. adding 12 points. “I want to thank my guys for a great season.  It was a pleasure to coach this group every day for the last 7 plus months.  They genuinely wanted to get better and worked towards our goals every day.  We weren’t perfect but we were always headed in the right direction.  I know the disappointment of our exit this year will motivate them – and me – to come back next season resolved to get back to the title game and win it. I know there will be 14 other teams with the same goal and we will have to work hard every day to be better than them when it counts.  Thank you to all those who have supported our team and made this year special.  Looking forward to a great 2015-16 campaign already!” 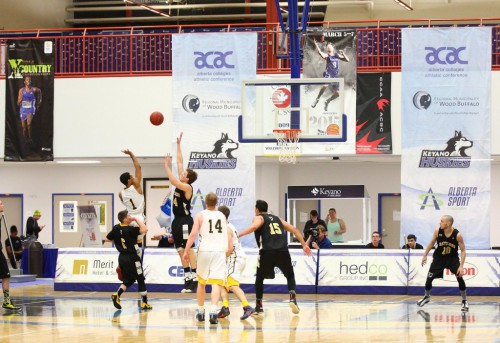