The Thunder Indoor Track teams hosted the 2nd ACAC indoor meet of the season on Saturday up at CFB Edmonton.  The event was well attended by all schools with the ladies finishing in a tie for 2nd place with SAIT behind Lethbridge and the men also finishing in 2nd place behind Lethbridge.  "Both our men and ladies ran well on Saturday," said Head Coach Matt Norminton.  "I rested up a few of the guys because they had already raced 3 weekends in a row but the rookies all raced very well." In the 1000m, ladies Co-Captain Marriya Jenkins finished in 4th place, setting a new school record.  The other ladies' Co-Captain Shelby Edgar ran a season best and her 2nd fastest 1000m ever to finish in 7th place overall.  Rookie Bailey Troccoli-Hughes made her debut over the 1km distance to finish in 14th place.  In the men's 1km, 2nd year runner Michael Quick made a strong move for the lead with 350m to go but couldn't quite hold on for a medal as he finished in 5th place overall.  Men's Co-Captain Kevin Chambers kicked off his season, finishing right behind Quick in 6th place. After the 1k's it was over to the speedsters in the 300m.  Fifth year runner Kristina Dong ran a new personal best and school record over the distance to finish in 5th place overall.  Rookie Baylee Frissell finished just behind Dong in 7th place overall, also a new personal best.  "I'm over the moon with that time," said Dong after her race.  In the men's 300m, Avian Prince closed hard to run a new personal best and rank him as the 4th fastest Concordia runner of all time over that distance.  Qasim Valji finished in 9th place and ran a good 2nd half after a slower start.  In the men's 3k, Kevin Chambers doubled back to finish in 10th place while rookie Ian Lee made his debut over the distance to finish in 11th place just behind Chambers. In the 600m, Jenkins doubled back to pick up a Bronze Medal while Edgar finished in 6th place.  Troccoli-Hughes and Frissell also doubled back in the 600m to finish in 8th and 9th place overall.  In the men's 600m, Avian Prince and Qasim both made their debuts over the distance to finish in 5th and 6th place overall. In the final event of the day, both the men's and women's 4x400m relay teams finished in 2nd place to Lethbridge.
Next up for the Thunder is the Golden Bear Challenge meet being held at the UofA next weekend. 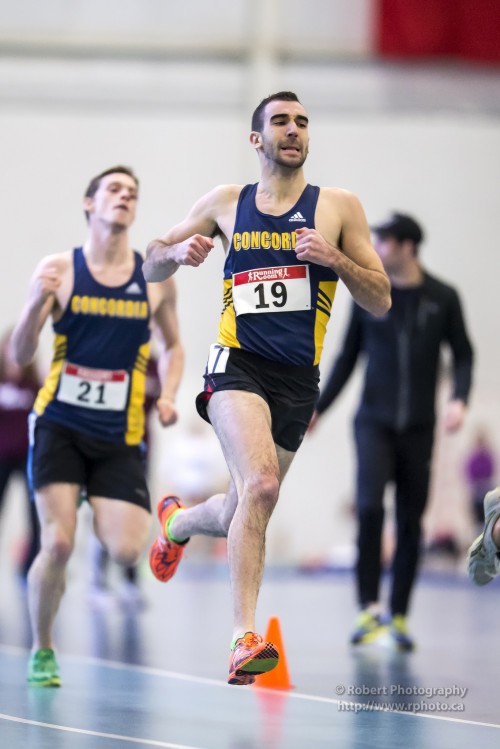