The Thunder Indoor Track teams took part in the Alberta Indoor Games this past weekend with some great results that included setting 4 new school records.
On Saturday it was the women who got things going in the 300m with the Jackson sisters taking part.  Trish ended up winning the battle of the siblings, setting a school record for the event of 57.53.  Barbara was right behind her in 1:00.67.  Then it was the men's turn to rewrite the record books in the 300m with Ben Thomas chopping a second off the old record and running a huge new personal best of 37.66.  He was followed closely by Chris Gaertner in 38.54 (season's best) and Cody Krantz in 43.60 (personal best).
The next event on the track was the 1000m and Shelby Edgar took her turn at setting a new school record, running 3:28.71.  The men were up next with Kevin Chambers running a season's best of 2:41.00 and men's Team Captain Joel Perren running a new personal best of 2:53.12. Then it was over to the ladies team Captain Marriya Jenkins to take her shot at setting a new school record – a challenge she was up for – chopping 7 seconds off her personal best and school record to finish 3rd overall in a time of 10:38.77.
Sunday's action saw Shelby Edgar run another personal best in the 1500m, running 5:33.15.  The final event of the weekend was the 4x400m relay and the men's team of Chris Gaertner, Ben Thomas, Joel Perren and Kevin Chambers took the opportunity to set their 2nd record in as many weekends, breaking the 3:40 barrier for the first time and running 3:39.4 for 3rd place overall at the senior provincial event.
Next up for the Thunder Indoor teams is the Nike Indoor Challenge being held next weekend at the Edmonton Garrison (CFB Edmonton) indoor track on Saturday, February 15th from 2-5 pm. 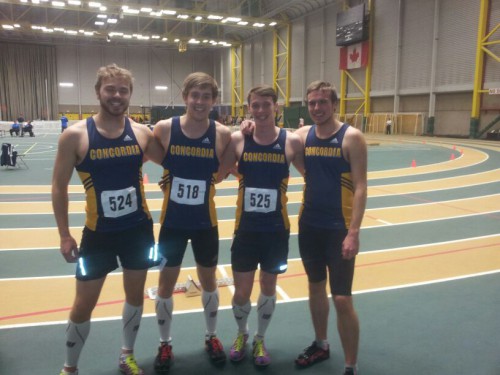