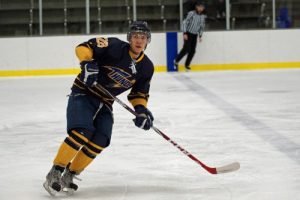 This weekend the Thunder fell twice to their cross town rivals from MacEwan University. Friday night at the new Downtown Community Arena, the Thunder showed determination fighting back from 2 goals down in the second period to make the score 3-3. However the Griffins responded right back and were able to beat the Thunder 5 to 3.

Dallas McIntosh scored 2 in the game and Brady Bakke added his first of the year.
Saturday night the Thunder and Griffins played a tight game at Clareview. The Thunder opened the scoring with a goal by Rory Davidson mid-way through the second period but MacEwan responded with 3 quick goals to close out the period. The Thunder fought hard but could not get back even in the game eventually losing 5 to 2 after a Griffins empty net goal.

The challenge remains difficult next week as the young Thunder look to be victorious against the strong Augustana Vikings.