The Concordia Women’s Soccer team played under the worst weather conditions of the season this past Saturday against the King's University Eagles.  Faced with cold air, a torrential downpour and a must-win game, Concordia kept their slim hopes alive for a league championship with a 3-2 victory.   The Thunder ladies imposed their will early in the match by creating a number of chances and eventually scoring two quick goals in the 21 and 22 minute mark by Jaida Stasiuk and Jill Sander.  The ball movement was exceptional in particular the wide play by both Sander and by Player of the Game, Brynn deVries.  “We achieved our offensive objectives today,” said Coach Imbrogno.  “We maintained possession throughout the pitch including in stressed areas…today we demonstrated intelligent football by all units and created chances, what more can we as coaches ask for?”  One possible area can be the reduction or elimination of scoring opportunities of other teams.  “Yes, that’s always a focus and that’s an ongoing principle that is tended to and nurtured…unfortunately, these types of days (rain and cold) are a big equalizer.”  Leading 2-0, Concordia was stung by King’s late in the first half to give the host team some life, which carried over into the second.  The game ended with two consecutive goals from questionable penalty kicks awarded to both teams.  First, the Eagles at the 83’ mark tying it at 2-2, then the eventual game winner by Concordia’s Karey Lubkey at the 90’.
The Thunder will now enjoy the traditional weekend off for Thanksgiving before getting revved up for the big showdown with NAIT on October 15th. 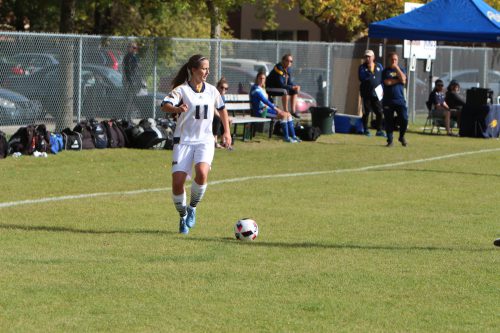