Thunder Hockey Rack up a Pair of Victories

This weekend the Thunder took on the Briercrest Clippers in a pair of games at Clareview Arena. On Friday night the Thunder and Clippers traded early goals before the Thunder pulled away and secured a 6 to 4 victory. Fifth year Forward Tyler Stevenson scored 2 goals, Phil Dillon added a shorthanded goal and Rhys Hadfield backstopped the Thunder to the win. On Saturday afternoon, the Thunder jumped out to a quick 4 to 1 lead before the Clippers clawed back with a pair of power play goals to make it a 1 goal game. In the third period, the Thunder pulled away and finished of the Clippers with a 6 to 3 win. Colin Minardi returned from a broken collarbone to score 2 goals for the Thunder and Phil Dillon scored 2 goals including another shorthanded goal. Connor Dobberthien got the win in net against his former squad.
Next weekend the Thunder take on the undefeated NAIT Ooks. Friday night marks the last home game of the year for the squad and Coach Dan Glegloff and the rest of the Thunder staff "hope to see a big crowd to send off our graduating players".  The puck drops at 8:15 at Clareview Arena. 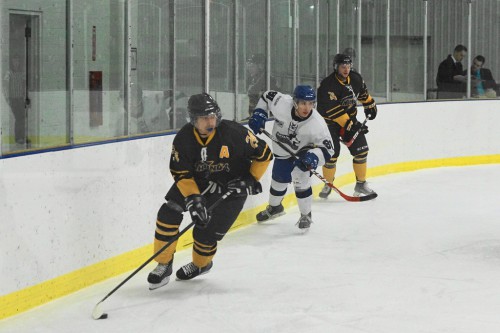