The Thunder Indoor teams mixed it up this weekend with some of Canada West's best CIS competitors at the UofA which saw them set 4 new ACAC Indoor Track records and 6 new school records. The 1000m was the first event of the weekend which saw ladies Co-captain Shelby Edgar lead the way with a new personal best time in the event, finishing in 21st position overall.  Bailey Troccoli-Hughes also ran a personal best to finish in 25th place while Brynn deVries made her indoor debut, placing in 28th spot.  Kenton Sportak continued his fantastic season, winning his heat and running his fastest time of the season to set a new school record and finish in 8th place overall.  Kevin Chambers took a tumble on the first lap but still finished in a respectable 17th place overall.
In the ladies 3000m, Marriya Jenkins ran a new personal best to finish in 4th place overall, setting a new school record at the same time.  Not to be outdone on the men's side, Kirk Sundt continued his banner season by also running a new personal best to finish in 5th place overall.  Kirk's time also bettered his own school and ACAC record.  Rookie Ian Lee continued to improve by taking off 17 seconds from his 3k time which he set the weekend before. The final event of Day 1 was the 4x400m relay which saw the Thunder men finish in 3rd.  The team of Sundt, Sportak, Ben Thomas and Michael Quick managed to break their own school record and set a new ACAC record in the process.  "That was a great first day," said Head Coach Matt Norminton.  "Everyone is rounding into peak form at the right time; this is fantastic!"
Day 2 saw the 300m speedsters take to the track first with Kristina Dong running her 2nd fastest ever time in the event to finish in 14th place.  In the men's 300m, Ben Thomas ran his fastest time of the season to finish in 25th place in a highly competitive field.  Avian Prince, Andrew Sanchez-Orosz and Qasim Valji all ran new personal best times to finish in 32nd, 34th and 35th place, respectively.  Kenton Sportak was the sole Thunder runner to take part in the 600m and he ran another excellent race to win his heat and finish in 4th overall.  Sportak broke his own school and ACAC record in the process.
The final event of the weekend was the 1500m and ladies Co-captain Marriya Jenkins won her heat in a season's best time to finish in 13th place overall.  Shelby Edgar ran a season's best and her 2nd fastest time to date to finish in 22nd place while Rachael Smillie ran a personal best to finish in 30th and Brynn deVries made her debut over the distance to finish in 31st place.  In the men's side, Kirk Sundt battled hard and nearly broke the elusive 4:00 barrier, finishing in 6th place in a new school and ACAC record.  Mike Quick ran a season's best to finish in 24th while Kevin Chambers did the same to finish in 28th.  Ian Lee continued his rapid improvement, knocking 16 seconds off his time from Lethbridge to finish in 30th place. "Day 2 was another great day for us," said Norminton.  "We have a week to get in a few more good workouts and then we'll ease it down in preparation for the ACAC Champs.  The key now is to keep everyone healthy and just stay sharp."   The Indoor Track teams will take next weekend off before heading to the ACAC Indoor Track Championships which are in Calgary (SAIT) this year. 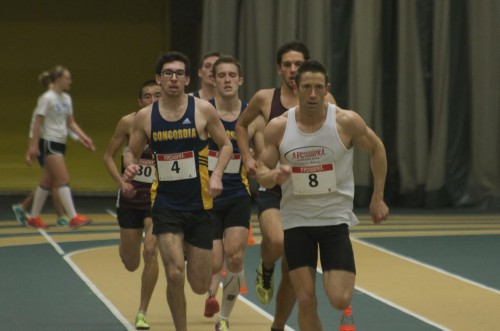