Thunder Hockey in Tough Against Trojans

The Concordia Thunder Men's Hockey team were in the crosshairs this weekend when the faced the defending ACAC Champion SAIT Trojans in a home-and-home series. Picking up where they left off last year, the Trojans came into Glengarry Arena on Friday night sporting an undefeated record but the Thunder put up a great fight, losing in a very tight battle by just a 2-1 margin. Rookie Ryley Rimmer scored his first ACAC goal. A late push by the Thunder resulted in two posts and some bad luck prevented the game from going to OT.
On Saturday night in Calgary, it was all SAIT as the Thunder lost 8 to 1 to the dominating Trojans.
The Thunder will be looking to bounce back this weekend when they face off against local rivals, the MacEwan Griffins.  The Griffins host on Friday night at Bill Hunter Arena at 8:15 PM with the Thunder playing host on Saturday night at Glengarry.  Game time for the home show is also at 8:15 PM. 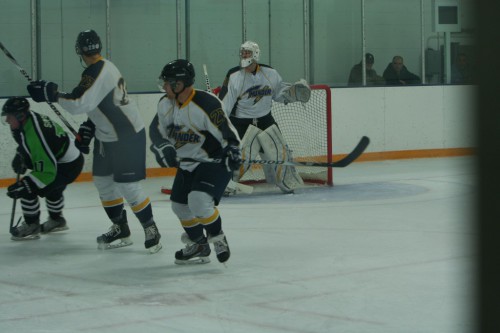