The Thunder Cross Country teams began their holiday weekend earning a few extra calories running at the Augustana Open XC meet in Camrose.  The competition was stacked with 2 CIS teams making an appearance in the guise of MacEwan University and the University of Alberta. Marriya Jenkins grabbed her first ACAC win of the season, finishing well clear of Lethbridge's Mikaela York. Jenkins mixed it up with some of the top CIS runners from the UofA and MacEwan, finishing 4th out of the post secondary runners.  "I accidentally went off course towards the finish," said a post-race Jenkins, apparently not finding the tough course tough enough!  Jenkins was also a bit under the weather all week so Head Coach Matt Norminton was particularly happy with the result.  "I know she wanted to be the top post-secondary runner out there today but the UofA and MacEwan runners came ready to race."  Shelby Edgar had another solid run, finishing 13th overall out of the ACAC runners and was followed closely by rookie Ana Zulic, who was the 15th ACAC runner across the line.  Not far behind was Thunder badminton player Rachael Smillie, who finished 18th overall.  "I ate much more sensibly (pre-race) this time," said Smillie, referring to her post-race stomach 'issues' at the end of the last race in Calgary.  Next across the line for the Thunder women was soccer player turned runner Kristina Dong.  She finished in 26th position, taking a half minute off her Calgary time.  The final Thunder lady across the line was Barbara Jackson in 34th. "If we put 4 girls into the top 20 in 2 weeks at the ACAC Champs, they have a real shot at a top 3 (team finish)," said Assistant Coach Tom Fleming.  "Tom's right," agreed Norminton.  "If Ana can run with Shelby and then Kristina can run with Rachael, we might just be able to pull this off."  The Thunder ladies placed tied for 2nd with NAIT for points but lost out in the tie breaker as NAIT's 4th runner scored one position higher than the Thunder's #4 runner.  The Lethbridge women picked up the win and are showing themselves to be one of the favourites for the ACAC Championships.
On the men's side, the Thunder picked up another ACAC victory, beating out Augustana and Red Deer by 7 points.  "The guys ran well," said Norminton. "I may have worked them a touch hard on Wednesday but that's okay. They are pretty focused on the ACAC Champs and hopefully we'll have Kenton back. He can contribute even as our #4 or #5 guy at the Champs".  Kirk Sundt was top 3 ACAC runner for the 2nd week in a row followed by rookie Michael Quick.  "Kirk ran really strong again but I was super happy with Mike's run.  He had a tough one out there (his back seized up) but he still finished as the #7 ACAC runner.  If we're going to win the ACAC champs, that's the kind of toughness we are going to need," said Fleming.   Sundt broke his own school record and Quick established himself as the #2 fastest Concordia man of all time.  Co-captains Kevin Chambers and Ben Thomas were the next Thunder men across the line.  "Kev had a great race despite not feeling 100%," said Norminton.  Chambers was well ahead of Lethbridge's #3 man and Thomas was over 3mins ahead of their #4 man.  "If Kev and maybe Kenton beat the #3 Lethbridge man and Ben beats their #4 guy by over 3 minutes again, we can win this," concluded Norminton.
Next up for the Thunder Cross Country team are the ACAC Championships being hosted by Keyano College in Fort McMurray on October 25th. 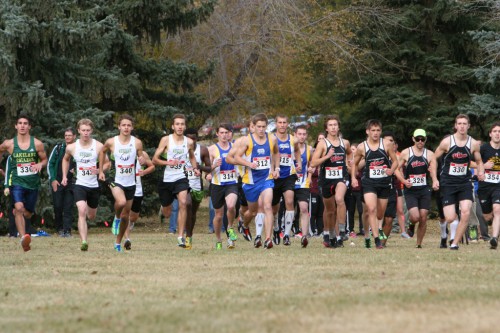