It took a couple of games for them to find their rhythm, but the Thunder Men's Hockey team erased the zero out of the points column with an overtime tie on the second weekend of the season. On Friday night the Thunder struggled in an 8 to 0 loss to the RDC Kings. Despite having 34 shots, the Thunder just could not solve the Red Deer Goaltender. However, it was a different story on Saturday night down in Penhold where the Thunder staged a gutsy comeback effort, fighting back from a 3 to 1 deficit to tie the Kings 3 to 3. Colin Minardi, Justin Moir and Jordan Hoffman provided the goals and Goaltender Rhys Hadfield turned away 36 shots including a game saving breakaway late in the 3rd period.
Unfortunately, things don't get any easier for the Thunder as they are back at it next Friday night when they will host the defending ACAC Champion SAIT Trojans in the first of a home and home series.  The puck drops at 8:15 PM at Glengarry Arena. 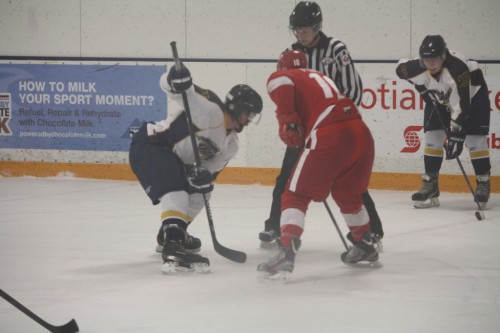