The #15 CCAA ranked Thunder Women and #4 CCAA ranked Thunder Men made the trek down to Calgary to check out the course for the 2014 CCAA XC Championships being hosted by SAIT in Calgary on November 9th. Unfortunately the course had to be moved across the street due to some of the damage in the park caused by the late spring snow storm in Calgary but the competition was fierce with all of the top ranked ACAC schools in attendance. UBC Okanagan – who have the #1 CCAA ranked Women's team and #7 CCAA ranked Men's team – were also in attendance along with most of the top open competitors in the province running.
The ladies were up first and team Captain Marriya Jenkins was out for some revenge after being relegated to 3rd place in the last Grand Prix race held up in Fort McMurray.  "The goal for Marriya today was to run strong in the lead pack and start closing the gap on Martens from Grande Prairie," said Head Coach Matt Norminton.  Jenkins did just that, finishing only 15 seconds behind Martens and in 2nd place overall out of the CCAA competitors.  "Marriya looked great today; every race she gets a bit stronger," noted Assistant Coach Tom Fleming.  Next across the line for the Thunder ladies was 2nd year runner Shelby Edgar who cracked the top 20 out of the ACAC competition and finished in 17th position.  Rookie Ana Zulic was next in, finishing in 24th and claiming the #10 fastest 5k time ever by a Thunder lady on what may have been the toughest course the teams have ever run on.  "If we can get Shelby into the top 15 at the championships, Ana into the top 20 and Rachael into the top 25, we have a shot at a medal.  It's going to be tough for sure as SAIT, Lethbridge and Grande Prairie all have great teams this year but it's not completely unrealistic," said Norminton.  Rachael Smillie was the #4 runner for the Thunder, crossing the line as the 29th ACAC competitor followed closely by soccer star turned runner Kristina Dong in 34th out of the ACAC runners.  "I think that was Kristina's best run of the season; she was competitive and racing the whole way.  I think she can sneak into the top 30 at the championships," added Fleming.  The Thunder ladies finished 5th out of the CCAA teams and 4th out of the ACAC teams, just 15 points behind SAIT.  UBC Okanagan were beaten handily by the Grande Prairie Women and Lethbridge Women, showing the huge depth the ACAC women's teams currently have.
The men were up next on the challenging course and all ran to or above expectations.  Kirk Sundt, a 4th year transfer from MacEwan, lead the way in 3rd place out of the ACAC competitors and posted the fastest time ever by a Thunder man over the 8k distance.  Michael Quick, recovering from a cold he picked up earlier in the week, finished in an impressive 7th place out of the ACAC competitors.  "Kirk had a great race, he's responding really well to the training we do and Mike was a total hero yesterday," said Norminton.  "I knew he was struggling after 4k but he kept at it and closed well.  Both Kirk and Mike can be top 5 at the ACAC Champs when they are healthy."  Team Captains Kevin Chambers and Ben Thomas were next across the line in 12th and 17th place, respectively out of the ACAC runners.  "Kevin can be top 10 at the Champs. He's running awesome right now," commented Fleming. "Ben has improved so much. He finished 34th at the ACAC Championships 2 years ago.  Now he's a top 20 guy and should be top 15 at the championships," said Norminton.  "With how much these 2 have improved in 2.5 years, it really goes to show how much you can do with some good old fashioned hard work."  The Thunder Men finished as the 3rd CCAA team, losing out to UBC Okanagan and Lethbridge but were actually only 1 point behind Lethbridge in the ACAC standings.  "If we can get Kenton healthy for the Championships, we can beat those guys for sure," figures Co-captain Ben Thomas.
Next up for the Thunder is the Augustana Open XC meet hosted in Camrose this coming Saturday, October 11th. 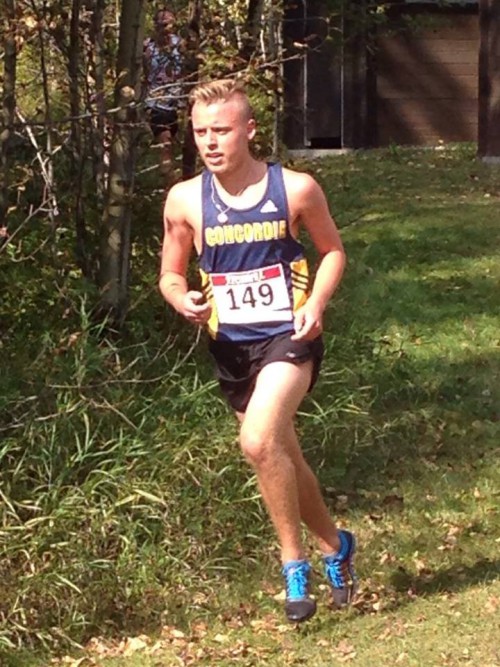