It was a disappointing weekend for the Concordia Thunder Hockey team.  With a couple of wins, the team would have pretty much assured themselves of a playoff spot.  The two defeats they suffered will now mean that the team has to fight their way in, as they have now dropped one point out of the playoff picture. "It was a strange weekend," said Head Coach Dan Peacocke. "We actually played pretty well but every time we made a mistake, Portage made us pay for it by depositing the puck in the back of our net!"  Indeed both games were quite entertaining (Friday, 3 to 1 loss and Saturday, 7 to 5 loss), but every time the Thunder managed to build a little momentum, Portage seemed to have the answer by scoring timely goals, repeatedly taking the wind out of the Thunder sails.  Concordia was playing catch up all weekend long and just never seemed to get the break they desperately needed in order to bring some ease and fluidity into their game. Despite the setback this weekend, this team appears to have great resolve and they have plenty of time to work themselves back into the playoff picture.  A somewhat surprisingly optimistic Coach Peacocke concluded his summary of the weekend by saying that "when playoff time rolls around, we will not only be in it, but we will be a team that will surprise a lot of people in regard to just how well all the key performance parameters have come together… adversity is an amazing teacher."
The Thunder will have plenty of opportunity to right the ship as they play host in a pair of games against the Keyano Huskies (Friday night at 8:15 and Saturday afternoon at 4:30) before hosting a third weekend game in the twice-postponed match up with the NAIT Ooks.  Game time is Sunday night at 8:15 PM.  The Keyano games are at Glengarry Arena, 13340-85st as per usual but the NAIT game will be played at Confederation Arena (11204 43 Avenue.  Come on out and cheer on the Thunder!! 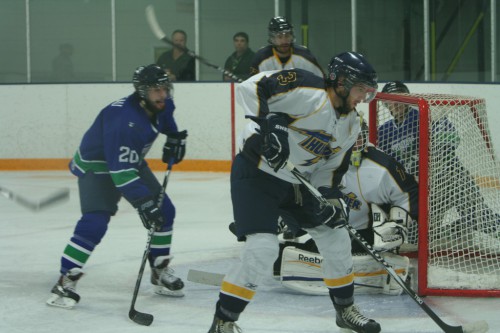