The Thunder Men's Volleyball team got a rough ride this past weekend, taking a pair of losses right on the chin from the NAIT Ooks. Friday night's action at NAIT saw the Thunder go down in a quick 3 games straight (25-13, 25-13, 25-14).  "Friday night was a rough outing for the Men's Volleyball team and unfortunately one of the worst matches we played this year. NAIT beat us across the board in all categories,' lamented Thunder Head Coach Joel Mrak.  One bright spot in the gloom was the play of rookie Left Side Nick Dove who recorded 8 kills and 11 digs and was also awarded Player of the Game honours.
Back at home on Saturday night, the Thunder were determined to show themselves and their fans that Friday night's performance was not reflective of their true team character. "Saturday night's performance was completely different (than Friday's) and the team competed for about 80% of the match. The score probably doesn't reflect how close the game actually was as both sides competed for every point," stated Mrak.  In spite of their spirited play, the Thunder went down to defeat, suffering another 3 set loss (25-20, 25-17, 25-19).  Second year Libero Matt Fulton added to his ACAC-leading digs record, putting another 18 on his stats line and collecting Player of the Game honours in the process. Adam Baker also had a solid outing with a 7 kill, 9 dig outing.  Nick Dove showed his consistency with a balanced 6 kill, 9 dig, 1 ace performance. In summary, Coach Mrak commented, "it has been such an up and down season for the guys and (we've) struggled to find a consistent rhythm. Defensively, we have been in the top 5 in the conference and Matt Fulton has led the ACAC in digs per set all year."
The Thunder will finish up the regular season with a pair of home games against the Keyano Huskies, with the Friday evening tilt scheduled for 8 PM and the Saturday afternoon matinee at 3. 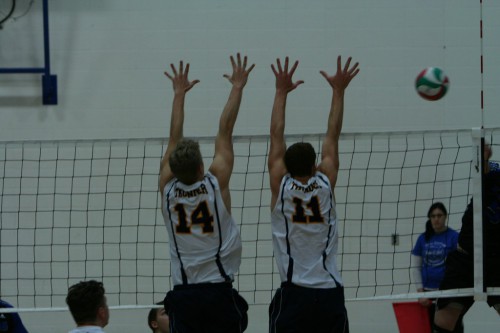