The Thunder Men's and Women’s Cross Country Running teams kicked off their seasons in style at the ACAC Grand Prix #1: The Running Room Open hosted by Concordia.
The ladies were up first and team Captain Marriya Jenkins led the way for the Thunder ladies with a solid 3rd place finish.  Rookie Elise Nawrocki made her debut for the team, cracking the top 10 ACAC runners with an 8th place finish.  Another rookie, Bailey Troccoli-Hughes was also making her debut and finished in 16th place to give the Thunder women a 2nd place team finish behind defending National Silver Medalists, Lethbridge College.  A 3rd rookie, Baylee Frissell was the 5th Thunder runner home in 30th spot.  “We had some great runs from our veterans today and our rookies ran very well, too,” said Head Coach Matt Norminton.  “Unfortunately we were missing 2 of our other vets, Anna Zulic and Kristina Dong who were both out with injuries/illness and Rachael Smillie didn’t finish so add those 3 in and our girls will be in with a shot at an ACAC team medal this year,” added Assistant Coach Tom Fleming.
On the men’s side, the defending ACAC Champion Thunder got their season off on the right foot with a win over Lethbridge, beating their southern rivals by 25 points.  Fifth year runners Kirk Sundt and Kenton Sportak led the way for the Thunder men, finishing in 2nd and 4th places, respectively.  Captains Kevin Chambers and Ben Thomas were next across the line for the Thunder, finishing in 6th and 8th positions.  “That’s a great result for our top 4 guys,” remarked Norminton.  Rookies Andrew Sanchez-Orosz and Riley Bowker made their debuts for the team, both finishing in the top 20 ACAC runners (15th and 19th respectively).  Fleming was pleased with how the rookies ran. “Both Andrew and Riley had good days today; they are only going to get better from here.”
Next up for the Thunder XC teams will be a trip up to Grande Prairie for Grand Prix race #2 this coming Saturday. 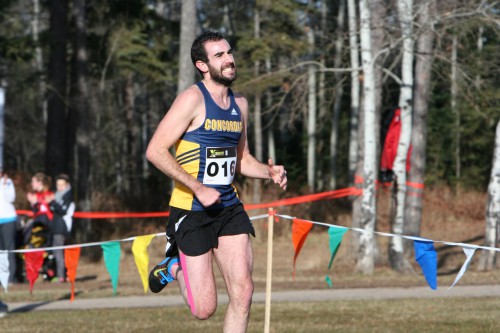