After a good training camp full of optimism, the Thunder Men got off to a mixed start in their 2015 season openers. Friday evening saw a much improved King's side come away with the spoils, 2-1. The win was largely deserved after a poor Thunder first half, and then being reduced to 10-men early in the second. Despite the reduction in field strength, the boys fought hard and pulled one back but it was difficult playing shorthanded and the Thunder were unable to get the equalizer before the final whistle blew.
Sunday saw a much improved overall performance with several tactical changes paving the way to a comfortable 4-0 victory over GPRC. "Although dominant for most of the game, there is still much room for improvement which will be needed heading into an away double-header at the home of the 2014 ACAC Champion Keyano Huskies," stated newly promoted Head Coach Ian Skitch. "Based upon this performance though, the good news is that the best appears yet to come."
The Thunder will make the long trek north on Saturday, September 19th where they will play the first match at 4 PM followed by a 2 PM kick off on Sunday, the 20th. 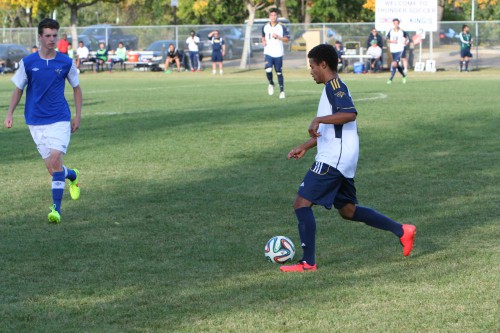