The Thunder Badminton mixed doubles team of Connor Reinson and Rachael Smillie finished a respectable 5th in the CCAA National Badminton Championships. "They started the tournament slow, but got stronger and stronger as the tournament moved along, stated a proud Head Coach Kevin MacAlpine. "They are both very young and still have several years ahead of them (for development). The experience that they got during this tournament will be of great benefit to them and we hope to see an even better result in future years."
The pair finished the tournament with a 2-4 record, defeating a team from Georgian College from Ontario in the 5th place game. On an even more upbeat note, as part of Team Alberta, they also came home with a Gold Medal!  Badminton Nationals has an individual and a team portion; as part of the Gold Medal Team Alberta Supremacy Champions, Connor and Rachael shared in the overall team success. "It has been a very long time since Team Alberta won the team event and once again shows the strength of the Alberta Conference," conclude MacAlpine.
Good job, Rachael and Connor!! 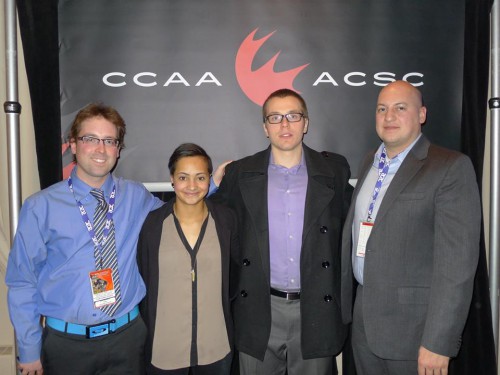