With 3.1 seconds left and down 2 against the GMU Griffins it looked like the Thunder playoff run would come to an end.  Dallas Wright caught the inbounds pass on a broken play, spun left and let fly the biggest shot of his career…the gym erupted as the three point shot kissed the bottom of the net and the Thunder rolled into the semifinals!
As if the thrill of the quarter final win wasn’t enough, the Thunder again trailed late against the Lethbridge Kodiaks and once against Dallas Wright hit a huge 3 to cut the deficit to 1 followed by Ben Grimsrud making a tough lay up in the lane to jump ahead by 1.  David Shantz was sent to the line with a chance to go up three but missed 1 of 2 giving the Kodiaks a look to win or tie with 2.3 seconds left.  The Kodiaks inbounded and drew a foul with 0.4 seconds left.  The Kodiaks would miss the first and have to intentionally miss the second to try to regain possession. However, Dallas Wright secured the rebound that sent the Thunder to the ACAC Championship game and with the ACAC holding a wildcard, guaranteed a trip to the CCAA National Championship.
Having taken down the #2 and #3 seeds in the tournament, the Thunder would now face the host and #1 seed RDC Kings for the Gold. The Thunder came out of the gate strong holding the Kings to 8 points in the first quarter and grabbed a 4 point lead.  A back and forth 2nd frame put the Kings up on the Thunder by 3 at the half. The second half would be an intense physical battle that saw the Thunder cut the RDC lead to 2 several times but (they) just couldn’t get all the way back to take a lead and as the final buzzer sounded, the RDC Kings topped the Thunder by a 67-62 score.
“What a weekend,” exclaimed Coach Wood!  “I could not be more proud of what this team accomplished.  We came together at the right time and with a little help from the basketball gods we found a way to be a shot or two from ACAC Gold.  Congratulations to RDC; they played such a great game and have such a talented team, it’s a great sign for us heading to Nationals that we can compete with a team of that calibre. All of our players bought into the message this weekend and showed what teamwork and belief in each other can do.  I’m excited to have 2 more weeks with this group of guys and I know we will bring everything we have to Squamish, BC for the National tournament!”
David Shantz was named to the tournament All Star team, with an honourable mention to Dallas Wright.
Now the Thunder will wait to see who their first round opponent will be.  The opening round of the CCAA National Men's Basketball Tournament will take place on March 13th. Stay tuned for more details as the tournament approaches!  CONGRATULATIONS, THUNDER!! 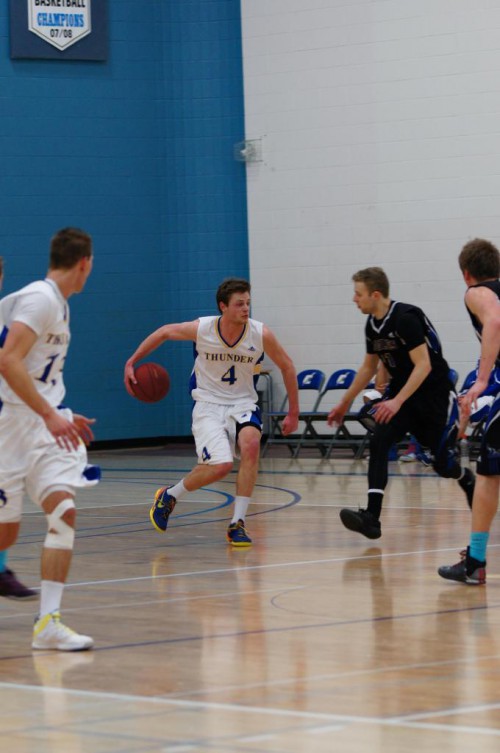