Thunder Indoor Track get Final Tune up Before ACAC Championship

The Alberta Indoor Track Championships were held this past weekend at the U of A and gave the Thunder Indoor Track teams their final tune up before next weekend's 2014 ACAC Indoor Track Championship. Despite a low turnout for the senior athletes, most of the Thunder teams ran new personal bests or season's bests which bodes well for this Friday and Saturday’s Championship meets, which will be hold at the Edmonton Garrison track.  “The guys and girls are really rounding into form now which is great. I think everyone ran either a season best or new personal best in at least one of their events and we had a few new school records set,” said Head Coach Matt Norminton.
On Saturday it was the 1500’s and 400’s that were on tap and the ladies got things rolling with team Captain Marriya Jenkins picking up 3rd place overall in a very good time of 4:56; a top 5 time for her.  Shelby Edgar was next across the line in a new personal best of 5:32.36 (5th place) while Patricia Jackson ran a new personal best of 6:31.05.  Then it was over to the men and despite being stuck in the slower heat, Kevin Chambers was not to be denied setting his first personal best of the season, winning the heat and finishing 7th overall in a new school record of 4:16.18.  Rapidly improving Ben Thomas put up the 2nd fastest time ever by a Thunder runner, finishing in 13th position overall in a time of 4:35.05.  Finishing just behind him was men’s team Captain Joel Perren, also running a new personal best of 4:35.63.  Then it was over to the speedsters in the 400m and Tania Eljurdi finished in 6th place, running 1:19.25 while Barbara Jackson ran a new personal best of 1:20.75 to finish in 7th spot.  On the men’s side, Chris Gaertner ran his fastest time of the season to finish in 54.46.
Sunday had 3 events on the schedule for the Thunder indoor teams: 200m, 800m and 3000m.  In the men’s 3k, Joel Perren ran a season’s best to finish 10th overall in 10:22.08.  In the ladies 200m, Tania Eljurdi set the school record, running 34.67 and edging out teammate Patricia Jackson in a photo finish, 34.83.  Barbara Jackson was next across the line in 36.12.  The girls finished 11th, 12th and 13th overall, respectively.  In the men’s 200m, Chris Gaertner set a school record and ran a new personal best of 24.35 to claim 10th overall.  In the ladies 800m, Marriya Jenkins finished 4th overall in a time of 2:25.94, her 2nd fastest time ever.  Shelby Edgar had a huge run to finish 5th overall in 2:37.22.  The last event of the day saw Kevin Chambers and Ben Thomas line up in the men’s 800m.  Chambers posted his 2nd school record of the weekend, running 2:01.21 to finish 3rd overall while Thomas ran his 2nd personal best of the weekend, 2:07.37, to finish in 6th spot overall.
Next up for the Thunder Indoor Track teams are the ACAC Championships on Friday evening and Saturday morning (March 7th and 8th), being help up at the Edmonton Garrison fitness center.  Friday session goes from 6-9 pm and features the 1500’s and 400’s while the 800’s, 3k’s and 4×400 relays go on Saturday.  Both Thunder teams will be hoping for top 3 finishes as last year's teams finished 3rd overall.  GO THUNDER!! 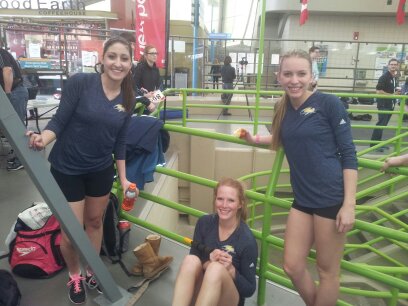