Four teams faced elimination this past weekend at the RKAC.  The first match of the night saw the MHC Rattlers take down the Lakeland Rustlers in a thrilling 82-80 decision.  The next battle would pit the host Thunder against the high scoring GPRC Wolves.
The Thunder would come out very strong on their home court jumping out to a 25-11 lead after the first quarter and would maintain a 12 point lead heading into halftime.  Some great adjustments by the Wolves sent them on a 20-2 run putting the Thunder down 8 and against the ropes heading into the 4th.  Not to be denied, the Thunder used their best three point shooting performance of the season to come racing back, making 4 three pointers in 5 possessions, regaining the 12 point advantage they held earlier and finished off the Wolves 93-81.
“A tremendous basketball game by both teams,” stated a relieved Coach Wood.  “We faced some unfortunate circumstances and injuries that put us in this do or die position against a very tough opponent in GPRC.  Tonight, being able to have Jamaal Bucknor return to the line up and having 2 other 5th year players were the real keys for us.  Jamaal gritted it out through an injury and Dave Shantz and Dallas Wright played like it was the last time they would step on the floor.  Also, Rob Haack had his best game in 3 years.  Between those 4 guys there is 19 seasons of ACAC experience to draw on and I feel that was huge for us tonight.” David Shantz and Jamaal Bucknor registered their usual double-doubles; Dave with 22 and 15 and Jamaal with 13 and 13.  Rob Haack nailed 6 three pointers on his way to 22 points.  Dallas Wright added 17 and matched a career high with 7 assists.  Ben Grimsrud helped out with 10 points and 3 steals with Liban Abdi- Aziz leading the bench effort with 9.
Day 2 of the Qualification round placed the MHC Rattlers against Thunder to decide the 7 and 8 seeds heading into next weeks’ ACAC Championship. In nearly a carbon copy of the previous night, the Thunder would take a big first half lead, only to watch the Rattlers battle all the way back, but key shots and plays down the stretch kept the Thunder ahead and claimed a 91-83 victory over the Rattlers. “Today we had two superb performances from two very special players” remarked Coach Wood.  “Dallas Wright and David Shantz were unbelievable tonight.  Med Hat is a tough team and those two were able to be dominant.” David Shantz registered a career high 31 points to go along with 12 rebounds.  Not to be out done, Dallas Wright matched the 31 points and added 5 steals along the way.  Jamaal Bucknor and Ben Grimsrud both had 9 points to help the Thunder to victory.
Next up, the Thunder will head down to Red Deer College for the ACAC Championships where they will take on the MacEwan Griffins in the first round.  The opening match goes at 3pm on Friday!  GO THUNDER! 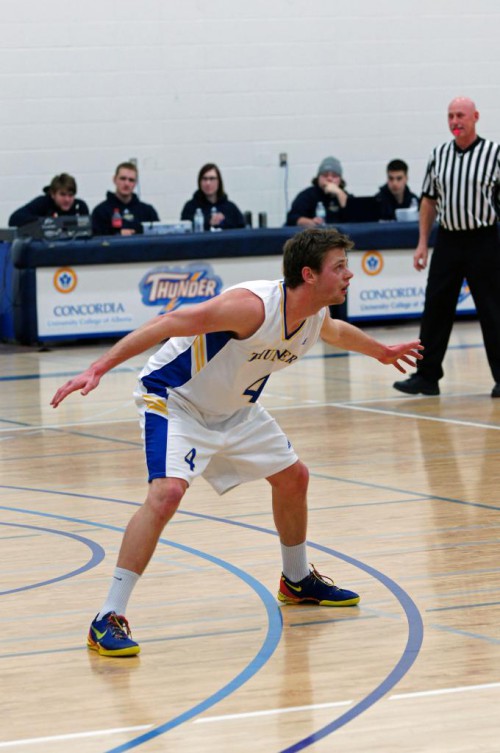