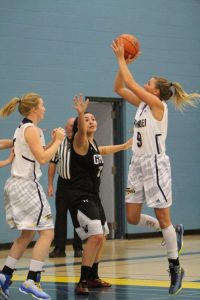 The Thunder Women’s Basketball team kicked off the second half of their ACAC season with a home and home showdown with the Lakeland College Rustlers. Going into the match the Thunder were sitting in 2nd place in the North Division and the Rustlers came in at 3rd place, so this was a pivotal match for both teams. Friday night at home, the Thunder jumped out to an early lead, setting the tone with a 19-8 lead. “We looked great; we looked ready to play and that’s a great way to start 2017,” stated Head Coach Robbie Valpreda.  However, the second quarter saw Lakeland take over the driver’s seat and cut the Thunder lead to 25-23 going into the half. In the third stanza, the Thunder got their legs back with 4th year guard Shyanne Walton and 5th year guard Nakita Newman leading the way. The Thunder pulled away in the fourth quarter leading by as much as 13 pts before sealing the deal with a 58-49 win. “We played well for 3 out of 4 quarters. We got through some poor decisions and that’s great as it shows we have some character. I’m not pleased with the way we shot the ball tonight from the 3pt field (2-12) but we were more consistent at the FT line and that gave us the momentum we needed to get the win”. The Player of the Game went to Shyanne Walton with 7pts, 9 rebs, 3 asst and 3 steals. The Thunder Women’s Basketball team would also like to thank the Thunder Men’s and Women’s Volleyball teams for all their support; it was greatly appreciated!
Saturday night the action moved to Lakeland College, one of the toughest venues in the ACAC. “I told them that we had to play tough tonight, to ignore the outside noise,” opined Valpreda. Once again, the Thunder jumped out to an early lead with Nakita Newman scoring the first five points for the Thunder. But the Rustlers would answer back with some hot shooting on the perimeter and devastating rebounding, outscoring the Thunder 11-2 on 2nd chance points. “We have to do a better job of battling under the rim. Those long rebounds killed us and our guards have to stay home to clean the glass.”  The Rustlers outscored Concordia 22-11 in the 2nd quarter and went into halftime with a 37-28 lead. In the 2nd half, the Thunder locked down the Lakeland on the defensive end but couldn’t get anything to fall on offense. “We had great looks at the rim, missed lay-ups, missed shots and missed free throws. We were good defensively but again we stood and watched; we never moved and we settled for bad shots,” lamented Coach Valpreda. In the end, the Thunder fell 63-52 to the scrappy Lakeland squad. “Give them credit; they were more physical than us, they beat us to loose balls and they simply wanted it more.” Congratulations to Nakita Newman who was Player of the Game.

The Thunder will now host a tough and hardworking team in the Keyano Huskies in a home double header.  Tip off times are Friday night at 6 and Saturday afternoon at 1 PM.