The Thunder Women's Basketball team headed into the final weekend of play for the first semester on a 6 game winning streak. They knew they would be challenged by a very good team in the Lakeland Rustlers. “Lakeland does a lot of good things; they have an excellent player in Romanalyn Inocencio and can shoot the ball very well,” opened Coach Valpreda. The series got underway Friday night in Lloydminster with the Thunder getting some good looks but they could not capitalize and get any momentum going. Lakeland took advantage of these Thunder mistakes and jumped out to a 10pt lead early in the second quarter. "We had no energy to start, no emotion. Every time they attacked it seemed like we took two steps back instead of holding our ground.” Late in the quarter, the Thunder did go on a small run to cut the halftime lead to 38-32.  In the second stanza, the Thunder looked sharper but every time they started to close the gap, the Rustlers would make some big 3pt shots. “We gave them too many second chance opportunities on missed rebounds and Lakeland capitalized on that.” The Thunder continued to grind it out, attacking the rim and getting to the free throw line or getting open lay-ups. In the last 3 minutes of the game, the Thunder outscored Lakeland 14-5. With 45 secs left, Nakita Newman made a valiant effort to get fouled at the 3pt line and made all three of her foul shots tying the game at 66-66. In the dying seconds, the Rustlers got to the free throw line with Inocencio make 1 out of 2 giving home town ladies a 67-66 lead. With 6 seconds left, the Thunder made an attempt at the rim but fell short, losing for the first time in seven outings by one agonizing point. “We played catch up the whole game, even though we outscored them both in the 3rd and 4th quarter," stated Valpreda. "We didn’t really hit our stride until the 4th quarter. That can hurt you when you are on the road and tonight it did.” Player of the Game was Nakita Newman with 16pts, 12rebs and 2assts.
Saturday night the Thunder were back to defend their home court and finish the semester off with a positive outcome. “We needed contributions from everyone on this team. Every player on this team does something good and its not always going to show on the stats sheet but it will give us momentum when needed.” The Thunder came out looking ready to play and were led in the early going by veteran Ann Stewart who started the game making the first 3 baskets. In the second quarter the Thunder locked in and played excellent defense, allowing the Rustlers just 8pts in the quarter and went into halftime with a 35-25 advantage. When the second half opened, Concordia looked like they had lost their hunger and had to take some early timeouts to refocus and stay on track. Lakeland made a strong push to come within 6pts, but the Thunder challenged the threat and again made a strong counterpunch, again led by Ann Stewart. “Ann rose to the challenge tonight. I’m proud of her; we challenged her to be better and she was. The other players feed off her energy. She was poised and slowed herself down, making good decisions," averred Coach Valpreda. Every time the Rustlers looked to make a move the Thunder would counter with one of their own and took the game 60-53. The Thunder showed great character and resilience in the win after such a devastating loss the night before. They stuck together and bounced back. The thunder also took advantage of points in the paint, outscoring the Rustlers 38-14, “That was huge for us tonight. We didn’t take bad shots on the perimeter like we did the night before. We got to the rim and scored.” The POG was Ann Stewart who had 23pts, 10 rebs and 2 blocks.
The Thunder have some time off now, getting the bye in the last week of league competition. "We get some time to recover and focus on academics. We had an excellent first semester but the real work still has to be done as the second semester is the toughest,” closed out Coach Valpreda. 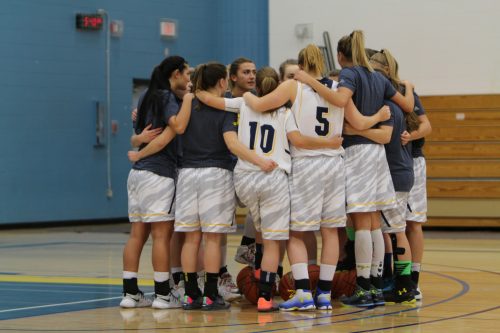