An odd set of circumstances facing the Lakeland Rustlers this past weekend led them to forfeit the Friday night showdown with the Thunder, awarding Concordia the win without having to make the trip to Lloydminster. The Rustlers would then have to make the drive into Edmonton for Saturday night’s first semester finale with the Thunder.  A motivated home side would come out and jump to a 25-8 lead and never look back, taking down the visiting Lakeland squad by a final of 91-68. Leaders for the Thunder – Brett Jakubec with 23 points and 5 rebounds; Ron Bacon with 18 points, 7 rebounds and 5 blocked shots and Mike Malin stuffed the stat sheet with 17 points, 7 rebounds and 6 assists.  Ryan McLaren rounded out the double digit scorers with 12 points while adding 8 rebounds and 3 steals.
“We were disappointed to not have the chance to compete on Friday,” said Coach Reagan Wood after the weekend. “Our guys love to play and wanted to go to Lakeland and compete in a tough environment, despite the disadvantage the Rustlers were facing.  We wanted to treat Saturday like a playoff game and the guys were able to do that starting with the effort at the defensive end.  I know the guys are looking forward to a couple days off. It’s been a long stretch competing every week for over two months.  We’re happy with the first half we’ve had but there is a long way to go so we have to stay ready for the challenges we will face in the second half of the season.” 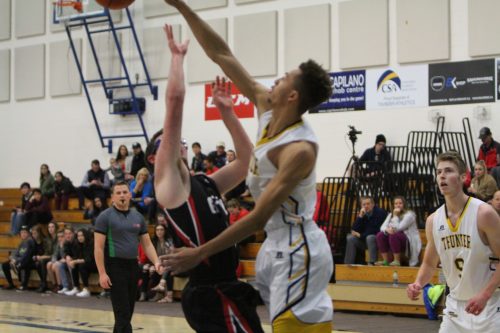