This weekend the Thunder Women’s Basketball team took to the court in the ACAC-Canada West Preseason Showcase presented by Basketball Alberta. On Thursday night the Thunder tipped off against the Red Deer Queens. “This is our first game to start the season. I know everyone is ready to hit the floor and compete as we are all excited to get the ball rolling," said Coach Valpreda. As the game began, the Thunder looked a bit nervous and tentative. “It’s a new team, new mentality and it’s going to take us some time to get to know each other and the dynamics of the team.”  Going into halftime the Thunder found themselves down 12 pts. The second half started with a better effort from the team, but Red Deer just 'shot the lights out'. “I have never seen a team make so many shots and especially 3-pointers. Red Deer played well, but at the end of the day this is just our first game compared to the 4th or 5th game for the Queens." In the end, the Thunder fell 74-37.
In game two of the tournament, the Thunder took on the Blazers from Canadian Mennonite University in Manitoba. “We knew coming into this second game we had to be better than the night before, make some adjustments and play basketball,“ said Coach Valpreda.  That they did, as the Thunder players and coaches alike began to jell and by halftime, the Thunder found themselves up 15 pts. “Our goal going into the second half was to be more aggressive, finishing at the rim and working on being better on the defensive end." The Thunder looked more comfortable playing together and it was obvious that they were growing more accustomed to each other as the half went on. The final score was 76-39 for the Thunder.
Next up, the Thunder will be heading down south to Montana to take on some Junior Colleges from October 7th-9th. 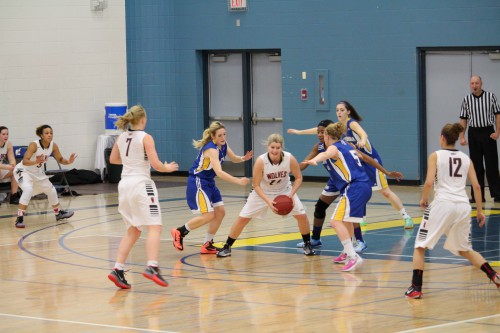