Battling injury and illness, the Thunder Women's Basketball team stared down adversity and took the fight to a very tough and physical Keyano Huskies squad. “This past week has been rough for us. We have had individuals with injuries who haven’t practiced and others who were under the weather," opened Coach Valpreda. In spite of the adverse circumstances, the Thunder jumped out to a 21-10 lead after one quarter on Friday night, with some of the bench support players taking over for those starters who couldn’t go. In the second stanza, the Huskies battled back outscoring the Thunder 17-11 and going into the halftime with ten offensive boards. “We have to do a much better job keeping them off the glass. They're very physical and as we were not 100% healthy; we allowed them to push us around."  In the second half. the Thunder recovered and set the tone, taking it to the Huskies and outscoring them 34-26 in the paint. One of the focal points of the game was the play of the 'three amigos' that stepped up and carried the team to a 64-57 victory; Nakita Newman (12pts), Sofia Lucadello (15pts) and Ann Stewart (13pts, 10rebs). “Those three gave us the momentum going into the third quarter. We got bench play also from key people and overall it helped us win tonight’s game. It wasn’t pretty and I knew it wasn’t going to be with the week we had but we got through it and never gave up.” Congratulation to Sofia Lucadello who was the Player of the Game.

Saturday afternoon’s matinee game was a quick turnaround for both teams. Coming off a hard fought win the night before the Thunder knew again they would have their hands full again with the Huskies. “They're fighting for a playoff spot like everyone else in this league at this time of year. We have to match their energy and effort,” stated Coach Valpreda. It was all Huskies in the first frame as Concordia started the game with five turnovers in a row and the Huskies taking an 11-3 lead. The Thunder looked as if they had no energy whatsoever at both ends of the floor and Keyano jumped all over it. It wasn’t until the bench came in for the Thunder that a spark was ignited. Rookie Allison Raitz hit a 3pt shot that led to a surge for the Thunder to tie the game up at 13-13 and then take a 15-13 lead after one quarter. In the second, the teams traded points with the Huskies taking a razor-thin 31-30 lead going into the half. "We looked a little too content with the win the night before and I had to emphasize the need to play with more urgency and energy to get back in this game," stated Valpreda.  With less than a minute left in the third quarter, the huskies were in the lead 64-63 when Morgan Dool hit a clutch 3 pointer from the corner to put the Thunder up 66-64. “Morgan was big for us, especially in the 4th quarter, scoring 8pts and making a big shot; her teammates found her at the right times”.  The Thunder beared down, played some gritty defense and with a favourable jump ball call and some clutch free throws made by Morgan and Michaela Barkwell, closed the game 70-66 for Concordia. The Thunder were really tested and "their toughness and character prevailed, giving us the victory," crowed Valpreda. Not to go unnoticed was the play of the two seniors on the team; Nakita Newman with 16pts, 6rebs, 2 assts and Ann Stewart with 17pts, 11rebs and 3 assts. Stewart was also named as the Thunder's Player of the Game.  “I’m proud of this team in how we played this weekend. We didn’t make excuses and everyone did something to help with the two wins. We now have time to heal up and rest before we play a much improved and dangerous team in the Eagles from Kings,” concluded Valpreda.
The Thunder will head across the river on Friday night to visit the 'Eagle's Nest' before coming back home for the Saturday night's 6 PM tip off. 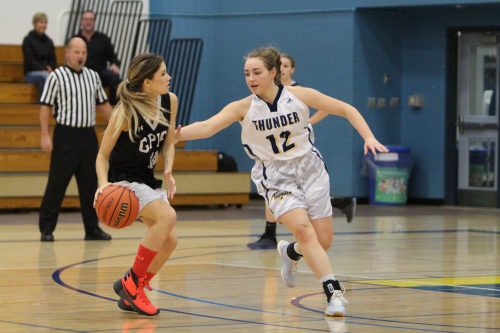