Friday night the Thunder Women’s Basketball team took to the court in Camrose where they squared off against the Vikings of Augustana. Right from the start, the contest was going to be a battle as both teams were competing for the last playoff spot in the North. It was the Vikings who came out and set the tone early, creating havoc for the Thunder on both ends of the floor. The Vikings came out with energy, hustle and continued to pour in basket after basket and as a result, the Thunder found themselves down 24-7 after the first quarter.  “We were not focused and prepared after that first quarter. It was like a shock for us. I had to remind the girls what we were playing for and to tell them that now for the next 3 quarters, we had to push ourselves to our limits to get back in the game,” stated Head Coach Robbie Valpreda. As the second quarter began, the Thunder were the ones who came out with a vengeance as they continued to attack the rim and not settle for jump shots. They applied pressure to the Vikings that had them turn the ball over enough times to get the Thunder back in the game. Concordia did an excellent job, only allowing the Vikings to score two field goals in the second quarter and cutting their deficit to 32-24 at halftime. As the second half began the Thunder continued to battle back, but couldn’t get past the 7 point deficit they were in but when the fourth quarter began it was the Thunder who made the final push to take the game into overtime.  “We battled every possession; we hustled after every loose ball and we never gave up,” remarked Coach Valpreda. Overtime began with the Thunder getting out to an early four point lead 58-54, but again the Vikings battled back to be on top with a 59-54 lead with 19secs left. Sofia Lucadello was able to put back an offensive rebound with 2.9secs left and gave the Thunder a 60-59 lead. Augustana inbounded the ball with one last attempt to win the game and for them it paid off as they scored the shot at the final buzzer to win 61-60. “(What an) incredible finish. This was an excellent game for everyone involved. I cannot say I have coached a game like this before,” glowed Valpreda. "Both teams were outstanding but even though the outcome was not what the Thunder wanted, their effort and resilience was exceptional. I’m so proud of the way these girls fought tonight, most teams would have given up after being down 24-7, but these girls fought and battled and played their hearts out and did everything to give us a chance. We played together as a united family.” Congrats goes to Nakita Newman who was POG with 21pts, 5rebs, and 2Blks.
Saturday evening the Thunder were back home to play their final regular season game. Coming into the game the Thunder still had a bitter taste in their mouth from the previous night and were looking to finish the season with a win. “At this point it’s about finishing with pride and confidence. This team has developed immensely over the second semester and we just want to continue to get better.”  The Thunder came out of the gate with the passion and energy they needed to win and after one quarter, the game was tied at 16. But the Thunder gave themselves some momentum on transition baskets to take the lead into halftime 30-25. Going into the second half, the Thunder continued to make basket after basket and jumped out to as much as a 7pt lead. The Vikings battled back, hitting some big 3 pointers and kept the game close. The Thunder held on to a small lead right to the last second as the Vikings gave it one more attempt from half to win the game; another possible buzzer-beater to win, BUT it fell short as the Thunder went on to win the game 53-51. Concordia received big contributions from everyone. Shyanne Walton, Ann Stewart and Nakita Newman all scored in double digits but it was Kendall Armstrong who was excellent off the bench. “Ken was great tonight. She was vocal, she battled and she scored 8pts off the bench. This is exactly the type of play Kendall can provide for us,” said Valpreda. "The Thunder should hold their heads high for a long time as they performed above all expectations this weekend. I’m so honored to have coached a team like ours. To win this game says a lot about who we are; to come back and win after losing a game for a playoff spot at the buzzer in OT the previous night and compete tonight…other teams might have just packed it in but not our team. This is a great team to have coached this season and I look forward to the future of this program and the players,” vowed Valpreda.
Congratulations to POG Kendall Armstrong on her strong performance. The Thunder will host their Identification Camp on April 2nd. Times will be announced soon. THUNDER UP!!! 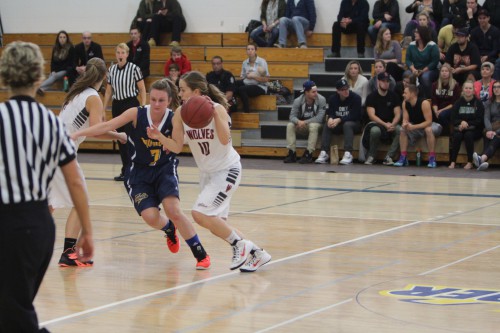