The Women’s Volleyball team ended their season squaring off against the Augustana Vikings from Camrose and came away with two losses. On Friday playing at home, the ladies came out with high energy and took the play to the Vikings right from the start. However, they were unable to sustain that energy and the Vikings took over the match and won in four sets with scores of 25-19, 25-13, 22-25 and 25-17. Nina Kutzner-Dudas was the Thunder Player of the Match.
On Saturday, playing in Camrose both teams wanted to finish their seasons on a positive note with a win and fought for every point. The match could have went either way but in the end the Vikings came out on top with scores of 25-23, 25-23 and 26-24. Shandelle Meyer was the Thunder of the Match.
Coach Turner’s comments from weekend: “Overall we gave it our best but in the end we were unable to score the big point when we needed it and came away with two losses. As a team we did some really good things this year, but we need to get better in some areas of the game and I will evaluate that in the next couple of weeks and continue to build this program to the level it needs to get to.” 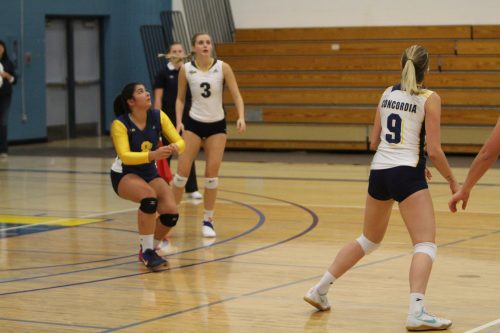