EDMONTON, AB – Concordia University of Edmonton student Colin “Marf” DeMaere took home the championship belt at the first ever test event for Esports in the ACAC, competing in Super Smash Brothers Ultimate over the weekend.

DeMaere and fellow CUE teammate Michael “KURSED” Logie both went undefeated in round robin pool play to move onto the Top 8 playoff bracket. DeMaere and Logie were joined by four other CUE student-athletes with Collin Campbell, Michael Ashton, Brad Stone, and Vincent Smith, to compete against nearly 40 other student-athletes from across the ACAC.

The playoff bracket consisted of a double elimination format and DeMaere used it to his advantage by being set to win in the Grand Final but was knocked out by fellow teammate, Logie. As this was DeMaere’s first loss, it setup a winner-take-all Grand Final Reset match. Demare switched from playing Ganondorf in the 1st Grand Final to Zelda in the rematch but lost his first game against Logie’s Wolf in 1:40. Believing in Zelda, DeMaere would win the next two games of the best of 3 Grand Finals. 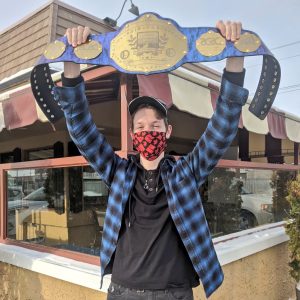 Big congratulations to DeMaere as he will go down in history as the first ever ACAC collegiate Esports champion!

You can watch the Grand Finals at https://www.youtube.com/watch?v=RLNcqHnVgUw.

Reflecting on the event, Collin “Zaradonis” Campbell stated “[We] had a blast at the event and it really brought out some really exciting moments that really built a story around the tournament.”.

In addition to the individual championship, the ACAC hosted 5 vs 5 team crew battle between NAIT and Concordia. The Ooks would go on to defeat the Thunder with a 7 stock advantage winning 15 – 8.

You can watch the Crew Battle at https://www.youtube.com/watch?v=DRjFXQX4YPQ.