After taking the previous weekend off, the Thunder XCR team made the long trip up to Grande Prairie on Saturday.  With conditions less than ideal, the ladies set off first for the 5k portion of the day.  Second year runner Elise Nawrocki led the way for the Thunder Women with a 7th place finish followed closely by Co-Captain Rachael Smillie in 8th place.  Bailey Troccoli-Hughes, Haley Dunwoodie and Shelby Edgar were next across the line for the ladies in 10th, 11th and 12th places, overall.  Rookies Lannie Houle and Mienna Starosielski were the next Concordia runners across the line in 16th and 18th places, respectively followed by 3rd year runner Anna Zulic in 24th place.  The Thunder Women finished in 3rd place as a team behind Red Deer College and the hosts Grande Prairie.  "I felt the ladies ran well today," said Head Coach Matt Norminton.  "It's certainly not ideal to sit crammed into a van for 5 hours and then jump out and race in miserable conditions but the girls did well and it was important for us to check out the ACAC Championship course.  We'll be ready for the ACAC Champs in 4 weeks."
The Thunder Men were up next, competing over 8km.  Co-Captains Ian Lee and Michael Quick led the way for the Thunder men, finishing in 4th and 7th place, respectively.  Rookies Keith Spruyt and Connor Reinson closed out the scoring for the men in 9th and 13th places overall.  The rest of the men were also rookies with Mohammed Abdullahi, Nils Jansen, Brad Agnew and Darien Khan finishing in 18th, 19th and 20th places overall.  "Ian and Mike both had solid runs today and Keith continues to improve at each race," said Norminton.  "I know Connor had a tougher day out there but he'll bounce back, he's a competitor."  The Thunder Men ended up tied with Red Deer College for points but lost on the tie breaker which goes to the team with the better 4th place finisher.
The teams will now take the Thanksgiving long weekend off before heading out to Camrose for the Augustana invitational. 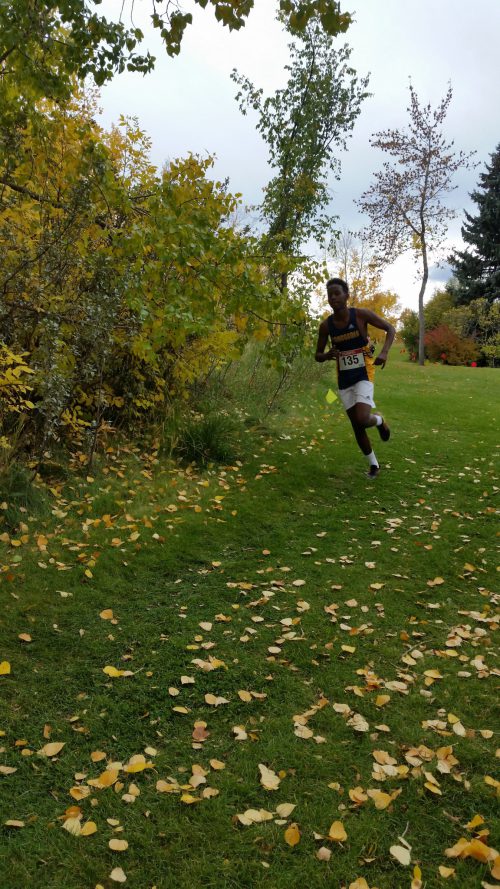