This was a weekend that will not soon be forgotten by the Concordia Thunder Women's Volleyball team.  For the first time in their 4 year ACAC history, the Thunder won back-to-back matches. Head Coach Sherri Milne was ecstatic with the team's achievement. "We had practiced hard to learn their tendencies and be ready for them."  Friday's match was a nail biter with each team trading set wins and going the distance to five sets. But on this night, the Thunder would not be denied. They pushed hard right to the final volley and captured their first win of the season. "It was very entertaining to watch their talent flourish on the court," stated Milne.  The 3-2 victory was sealed with set scores of 16-26, 25-17, 25-27, 25-21 and 15-13. Third year veteran Sarah Schwanz captured Player of the Game with 28 digs, 10 kills and 1 solo block.
Saturday the ladies came in with even more determination, looking to beat the Ooks again on their home court. "It was a great game to witness in our home gym.  Not only did we start strong but we continued our strong play throughout the entire match," gushed Coach Milne.  Senior player Bailey Magas was voted Player of the Game with 31 digs, 16 kills and 1 service ace as the team took the 3-1 victory 25-22, 22-25, 25-18 and 25-22. "As an entire team we were able to dig 112 balls in a four set match capturing a sweep over the Ooks. Saturday's win was largely due to our players playing with composure, strength and (the) pointers given from our bench players.  It truly was a team effort."
The Thunder will finish off their season this coming weekend with a two-game home stand against the Keyano Huskies.  The first match goes Friday, February 7th at 6 PM with the closer being held on Saturday afternoon at 1 PM.  Congratulations, Thunder!! 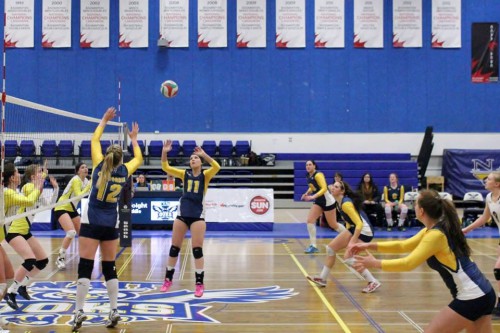